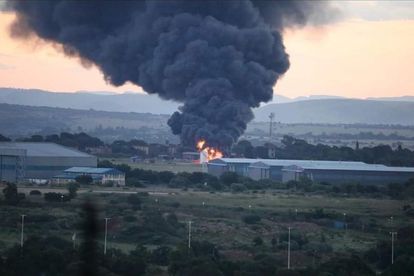 The South African National Defence Force (SANDF) has confirmed that the fire which broke out at the Waterkloof Air Force Base has been contained.

WHAT STARTED THE WATERKLOOF AIR FORCE BASE FIRE?

The blaze started on Sunday evening, 23 January 2022, after a fuel pump burst but the SANDF says it will give further clarity on the fire’s origin in a full statement. According to the SANDF, there had been a suspected leakage from a burst pump just hours before.

Videos and photos of the fire have been widely circulated and many are quite concerned. This is the third important landmark in South Africa to suffer damage in a matter of weeks – in the beginning of January, the Parliamentary precinct also caught fire and soon afterwards, the windows of the Constitutional Court were smashed. While arrests have been made in connection with the aforementioned, the incidents have raised questions around the safety of key institutions and landmarks.

Waterkloof is the same airbase the Guptas once flew into, in order to attend a family wedding nearby. The move was symbolic of the ‘state capture era’, defining just how much control the billionaires had over SA’s national authorities.

As the recriminations into this latest fire continue, many will question if this fresh catastrophe at the airbase is part of a coordinated plot. So far, law enforcement officials have been unable to link attacks on Parliament, the Department of Justice, and ConCourt to each other. Alas, suspicion have been raised…