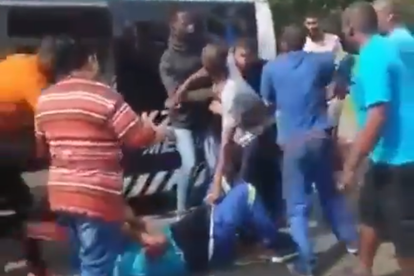 Oh man, this is an absolute shocker: A huge brawl erupted in the middle of a busy Durban road on Friday, after a traffic accident left one person requiring medical attention. However, when the emergency services arrived on the scene, it did little to calm the simmering tensions – and all hell eventually broke loose.

At least a dozen people were involved in the altercation. Punches were thrown, and some of the roadside rumblers got pushed to the floor. It’s also understood that the female victim injured in the crash was also targeted.

The sheer lawlessness of the violence was impossible to control for the paramedics, who were the only two people wearing masks at the time. A row of traffic soon formed behind the squabbling party, as horns blared in the background. Eventually, a security guard appeared on the scene to try and quell the rage, but frustrations continued throughout.

The furious reaction has since gone viral on Twitter, racking up thousands of views on Friday morning. The scene has now been cleared, with unverified sources claiming this took place in Newlands East.

However, one source claims that the person in the back of the ambulance was assaulted by those in the vehicle she crashed into. We have approached the relevant authorities for further clarity on this situation. But, whatever the circumstances, this sort of behaviour is utterly unacceptable, and makes motorists feel even less safe on the roads.

Transport Minister Fikile Mbalula confirmed on Thursday that 235 people were killed while driving over the Easter break. There were 189 crashes nationally, and 112 people were arrested for speeding excessively.