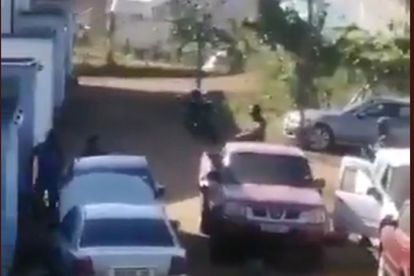 It appears calm is far from being restored in eSwatini, if the latest video clip doing the rounds is anything to go by. Parts of the country have been scenes of chaos over the past week or so: People have been taking to the streets, in violation of a recently-imposed curfew, to protest against the country’s ruling system and calling for a complete end to the absolute monarchy.

The pro-democracy protests have often turned violent, with members of the eSwatini army alleged to have been using excessive force towards civilians. The soldiers are accused of being behind the dozens of deaths that have occurred during the demonstrations.

At some point in the video, one of the men pushes the civilian, who goes out of shot. The officer then fires his rifle several times, presumably at the man. We warn you: This video clip is not for sensitive viewers.

The eSwatini government has however denied having issued a directive for its law enforcement officers to act against citizens at any cost – including death. The country’s prime minister Themba Masuku said they were yet to receive a report on the fatalities linked to the protests.

Masuku also claimed the reason they roped in law enforcement was to protest its citizens and regain the rule of law.