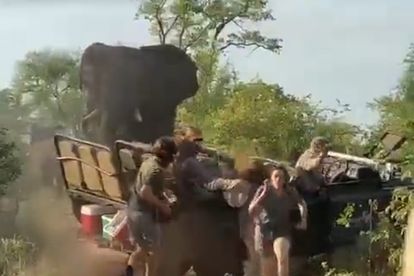 Shocking video has been doing the rounds on social media lately, showing an outraged elephant attack a car full of tourists, who, by the looks of things, had gone on a Safari drive.

In one of the clips, which was shared by a South African tour guide, people can be seen quickly getting off the vehicle in a panic, with a voice yelling “Get out, get out” in the background. The elephant eventually leaves the scene while the tourists continue running for safety from the enraged animal. Another clip shows the elephant charging at the Safari vehicle, with the tourists onboard.

It isn’t quite clear where and when all this happened, but there has a floof of reaction to the video on Twitter.

We wonder what ticked off the elephant on that day. The animal caused extensive damage to the more external parts of the vehicle, including the door.

According to South African National Parks, Elephants are usually peaceful animals. Females may, however, be aggressive when young calves are present and bulls can be exceptionally aggressive during musth. All elephants may become aggressive when sick, injured or harassed.

“Elephants react to threats or challenges in three different ways. Dominance or threat displays are designed to demonstrate the superior strength and social position of the individual. They may look towards the threat, spreading their ears out. ‘Standing tall’, they raise their head and tusks high. Head-shaking and trunk-swishing can also be seen,” says Sanparks.