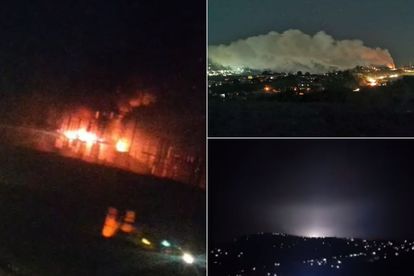 A massive fire at a substation in Durban has thrown a number of areas into darkness. Photo: Queensburgh Crime Watch / Facebook, @Abramjee / Twitter and WhatsApp

A massive fire at a substation in Durban has thrown a number of areas into darkness. Photo: Queensburgh Crime Watch / Facebook, @Abramjee / Twitter and WhatsApp

A blaze broke out at the Mariannridge Major facility, Durban, just after 19:00 on Tuesday, 19 April. The eThekwini Municipality stated that its technicians will soon look at whether electricity can be safely restored to areas affected by this.

Technicians will be on the ground to assess the explosion and fire at a substation in Pinetown, Durban. The explosion reportedly had an impact on other substations in Waterfall, Westmead and Hillcrest.

The explosion at the substation has led to electricity outages in Durban’s inner west and southern areas. Reports state that a municipal official said emergency crews have doused the flames of the blaze.

Assessors will make their way onto the site, once it is safe, to examine the damage. Once the damage has been assessed, they can determine whether or not it is possible to start restoring power to areas that have been affected.

Videos of the blaze circulate online

Winter is coming: 101 days of power cuts *could* be on its way to SA

Eskom revealed that South Africa could experience over one hundred days of load shedding this winter. This is if the embattled power utility is unable to keep the power on and the country warm. During a media briefing on Tuesday, 19 April, Eskom shared that turning the power off is the last resort done in order to protect the national grid. The power utility pushed the country into Stage 4 load shedding.

The news followed the tripping of two more generating units at its power stations. South Africans have been urged to use power sparingly when electricity is available. Eskom shared that it is working around the clock to return the units back to service. With winter on its way, Eskom is battling to meet the demands of consumers. It could be a very chilly and dark season for locals.