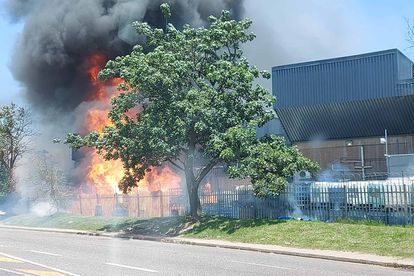 A chemical factory in New Germany, Durban has gone up in flames on Tuesday afternoon, after yet another explosion ripped through a city suburb. This development comes just days after an explosion was reported in Wentworth, leaving seven Durbanites in need of hospital treatment for smoke inhalation.

Durban rocked by a second explosion within days

The early details we have so far are sketchy, but we’ve had it confirmed that there have been ‘multiple injuries’ at the scene. In terms of traffic and activity surrounding the affected area, the following updates have been issued:

One of the first official medical responders at the scene, Garrith Jameson, told local media sources that the explosion took place inside the factory. More than one blast has been reported by witnesses, but this has not yet been verified.

According to paramedic Garrith Jameson, there are multiple injuries following the chemical explosion on Otto Volek Road in New Germany. @ecr9495 pic.twitter.com/w76nHFgphQ

Amongst other products, the factory in question is understood to be a major producer of sanitisation items. Following the explosion, thick plumes of smoke have engulfed the sky in New Germany, with Pinetown residents also affected by the billowing flames. With the fire still raging, it’s imperative that members of the public avoid the area at all costs.

There have been reports of an explosion on Otto Volek Road In Pinetown!! #pinetown #newgermany #durban #fire pic.twitter.com/zYVNdONi90