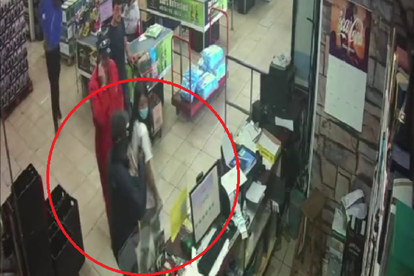 The woman was kidnapped at gunpoint on Thursday – Photo: Yusuf Abramjee / Twitter

The woman was kidnapped at gunpoint on Thursday – Photo: Yusuf Abramjee / Twitter

Dramatic CCTV footage has captured the moment a Chinese national was kidnapped at gunpoint, inside a Bellville liquor store. SAPS in the Western Cape have confirmed they are now investigating the incident, which has since gone viral online.

In the footage shared across social media, a fairly innocuous scene plays out at the start. About halfway into the video, some shady figures start to surround the Chinese nationals. It’s understood the woman in the clip is the store owner’s wife.

In an unsettling calm manner, a suspect in dark clothing pulls out a gun and pokes it into her back. An accomplice helps to escort the woman outside of the building, before another enforcer acts to stop others in the store from intervening.

A shopkeeper is also ushered out of the store, leaving the premises empty. One witness at the scene said the getaway vehicle – identified as a VW Polo – was seen speeding away from the Blue Bottle shop on Strand Road, heading towards Brackenfell.

André Traut is a spokesperson for the Western Cape SAPS. He has confirmed that three armed men threatened the security guard with a loaded weapon, before making a beeline towards the female Chinese national. No arrests have been made, as of 16:30 on Friday 21 October

“SAPS can confirm that an investigation has been initiated following a kidnapping incident this morning at around 11:45am in Bellville. Three armed men approached a security guard at a liquor store in Strand Street and threatened him with a firearm.”

“They then proceeded to the 27-year-old wife of the store manager and forcefully removed her from the premises, where after they fled the scene in a VW Polo. Arrests are yet to be made.” | André Traut