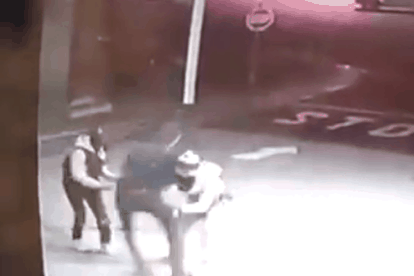 A video from last Thursday has made its way online this week, showing the heart-stopping moment two men – both believed to be visitors from Germany – were attacked outside of their Cape Town hotel.

Not a good look for the Mother City

The incident occured late on 27 February. The pair are being hassled by two other men who come into physical contact with them. As the tourists make their way to the front doors, one of the thieves attempts to pick a pocket and make a run for it. The victim fights back, as a small-scale melee breaks out.

The crook makes another attempt for the wallet, and eventually, decided to pull a knife on the targets. They rush towards the German visitors, and seemingly take what they need before making their getaway on foot. The victims retreated to the hotel to make staff aware of their harrowing ordeal.

There’s been little progress on the incident so far, leading to anti-crime advocate Yusuf Abramjee picking up the slack. He has alerted both the Western Cape Premier Alan Winde and the German Embassy to the matter. We’re still trying to establish if the tourist left South Africa immediately after this incident.

A German tourist was attacked recently near a hotel in Cape Town. He reportedly left SA immediately after the incident. Video as received. @GovernmentZA @southafrica @Tourism_gov_za @alanwinde @GermanEmbassySA pic.twitter.com/eQc2x3tFfP

Crimes against tourists in South Africa

Attacks on foreign visitors have made the news in recent months, as South Africa desperately battles with its image on the international stage. Despite being a favourite amongst overseas visitors, these type of crimes have the potential to seriously put people off coming to our shores. We understand investigations are still ongoing, and we await a solid and firm response from the relevant authorities.