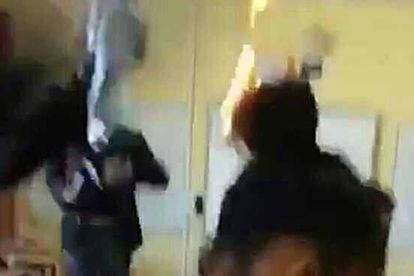 The bully behind a sick prank at a Cape Town school is facing further disciplinary action, after he was filmed setting the hair of a fellow classmate on fire. A relative of the victim, meanwhile, claims that the girl in the video has been bullied ‘on a regular basis’ – yet senior staff members at Belgravia High have so far failed to take action.

Here are the details we’ve been able to establish on Wednesday:

One student can be heard saying Kyk hier, haar hare kan nie nat raak nie.” (Look here, her hair doesn’t get wet.) A hatted schoolmate then requests a lighter from another learner, and someone tells him: “Jy, ha-ah!” – He then sets the girl’s ponytail alight, as others begin to laugh, before the bully pats out the fire with his hand.

WATCH: A grade 8 pupil at Belgravia High School in Cape Town has been suspended after he set a classmate’s hair alight.

The boy will face a disciplinary hearing soon. pic.twitter.com/1SbYSYGi8I

The aunt of the girl featured in the video has directed her outrage towards the school itself – and the principal. The family says they have been ‘let down’ by staff members, and the youngster allegedly no longer wants to return to school. Speaking to The Daily Voice, the concerned relative claims the Cape Town pupil ‘had been bullied before’:

“This is a third time they bully her like this and the school knows. The principal and the class teacher were made aware of it, but nothing was done. It can’t go on like this, no. She does not want to go back to school anymore.”