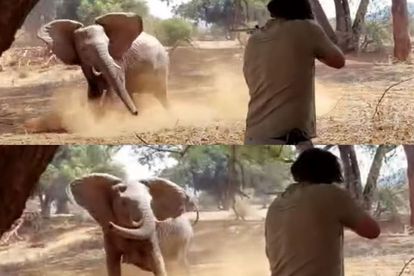 This extremely close encounter of an angry elephant charging a safari guest on foot in Kruger National Park was caught on camera.

WATCH AS AN ANGRY ELEPHANT CHARGE THE GROUP

Amazingly the two guides remained calm and in control despite the charging elephant being a few feet away from them.

The video starts with safari guests sitting beneath a tree, watching as a herd of elephants make their way past them. The herd split up, and some of the elephants started walking toward the group.

The two guides start making noises to alert the herd that they are there and scare them off. All goes well until one male elephant suddenly charges the group.

The two guides remain calm and in control as they try to intimidate the charging elephant with their voices while pointing their guns, ready to shoot if needed.

ALSO READ: WATCH: Horrifying video of a lion biting off a man’s finger

THE TWO GUIDES REMAIN CALM AND IN CONTROL

And just when you think this will take a turn for the worst, the charging elephants come to a halt before changing direction.

The video was captured by Sean Scott-Crosley and uploaded by Capture The Wild on Friday.

Last month we reported on a massive Nile CROCODILE weighing 660kg who BIT his handler during a show at the Crocodile Creek in KZN. And the attack was caught on camera.

According to Crocodile Creek in Kwazulu-Natal, the attack happened on Sunday, 10 September.

In the video, you can see the crocodile handler names Sean walking around and feeding one of the two crocodiles in the enclosure. He is seen talking to the onlooking visitors.

After giving the smaller crocodile a chicken, he walks around to go sit on the back of the MASSIVE Nile crocodile.

Click here to WATCH the video and read the story.