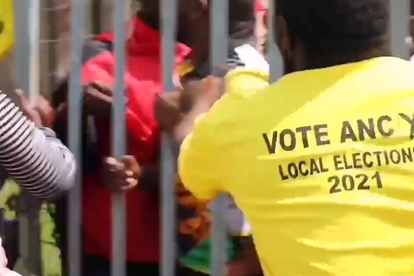 Julius Malema’s visit to Willowfontein, KZN on Sunday was beyond eventful. The EFF leader took his campaign to the province, but he soon found that planting the red flag in this part of the country would be no walk in the park – shortly after his arrival in the town, ANC members tried to block Juju from entering a polling station.

There was pushing, shoving and some very heated words exchanged between both parties. The ANC supporters, who were labelled ‘drunkards and fools’ by the combative Malema, made their opposition to the EFF entirely clear.

[VIDEO 🎥]: We want to make it categorically clear that there are no no-go areas for the EFF and no amount of drunk and disorderly behaviour by foolish individuals will stop us from campaigning. #RegisterToVoteEFF pic.twitter.com/D6JhqfuCA4

ANC have just attempted to block Julius Malema to enter a voting station in KZN. @MYANC what are you saying about this political intolerance from your people? pic.twitter.com/J9GC2bUhgb

EFF, ANC in tense stand-off ahead of 2021 Local Elections

After the scuffles had calmed, Julius Malema and his entourage were able to carry out an inspection of the voting venue – and all parties will be hoping for more orderly scenes when the polls for our Local Elections open in six weeks. Monday 1 November will be a ‘sink or swim’ moment for many organisations on the ballot paper.

Reflecting on the events of the day, the EFF posted a predictably bellicose statement on their Twitter page. They are demanding ‘action to be taken against the ANC’, suggesting that the ruling party must be disqualified from the ballot in Willowfontein. Malema himself also went on to say that the 112-year-old party ‘had now gone crazy’:

“The IEC MUST TAKE ACTION AGAINST THE ANC TO RESTORE AND SET THE TONE THROUGHOUT THE COUNTRY FOR THESE ELECTIONS. The ANC is resorting to violence and is demonstrating the highest form of political intolerance, there will be serious repercussions.”

“Let it be clear, there was NO CLASH between the mighty EFF and the political intolerant ANC. The ANC BLOCKED access to the voting station, a criminal act. There will NEVER be a no-go area for the EFF! No amount of drunk and disorderly behaviour by foolish individuals will stop us from campaigning.” | Julius Malema

"It's madness, the ANC has gone crazy. How do you stop people from campaigning?" – EFF Leader, Julius Malema.