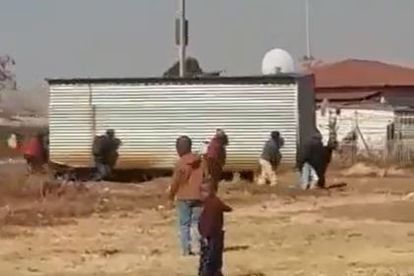 An entire corrugated sheet-built shack was lifted by a group of people from one location to another.

These strong men, captured on video, defied convention after carrying the shack by their hands without any mode of transportation.

SHACK LIFTED BY A GROUP OF PEOPLE

Usually, the process of relocating to another area or apartment requires the hiring of a removal truck or van and several people to help you scoop your furniture out of the building. By the way, the building is never demolished but left behind for the next tenant or owner.

Also, with regards to shacks, the norm is that the corrugated iron is usually broken down and de-attached so that it can be transported in pieces and reassembled at a new space.

However, this was not the case with these men, who decided to ‘cut corners’ and make the process, even more, simpler but at a cost to their strength.

The video was captioned: In South Africa, we don’t just move our furniture, we move the whole house #ProudlySouthAfrican.

The person filming the action is heard laughing and saying ‘Mihlolo’ – a Nguni riddle used when you can’t believe your eyes.

It is unclear when and which corner of the country this video was filmed in. But it has certainly provided ideas for shack dwellers on what to do next time they feel the desire to relocate from one stand to the next, legally that is.

Shack dwelling is a huge crisis in South Africa with thousands of people still squashed in undeveloped and risky environments all over the country.
Shacked environments are usually poverty-stricken, crime-ridden and unsafe to live in.

These environments, which are usually not far from urban areas, are on the receiving end of service delivery, with many without proper running water and sanitation.