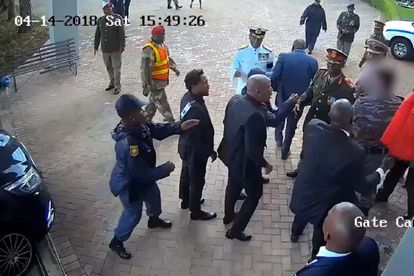 EFF leader, Julius Malema and party spokesperson, Mbuyiseni Ndlozi, have been mixed up in a messy common assault charge and AfriForum has amped things up by leaking footage that could land the pair up in big trouble.

Malema and Ndlozi were summoned to the Randburg Magistrate’s Court, on Wednesday, to answer to allegations that the pair had attacked a police officer at the late Winnie Madikizela-Mandela’s funeral, in April 2018.

It was alleged that Malema and Ndlozi had attacked an officer who was given clear instructions to not allow the EFF leadership into the cemetary. This, AfriForum have claimed, is allegedly what prompted Malema and Ndlozi to assault the officer.

The accused pair made it to the Randburg Magistrate’s Court accompanied by Dali Mpofu, Godrich Gardee, Floyd Shivambu and Hlengiwe Mkhaliphi.

The merits of the case were deliberated upon and the matter has been postponed to 10 March 2020, when the trial is expected to commence.

Outside of court, Malema vehemently denied the claims made by AfriForum and the NPA, stating that if he had really put his hands on the officer, he “would have panel-beaten him.”

“I’ve never done that. If I laid a hand on him, I would have panel-beaten him. I don’t play when I lay a hand. I didn’t do that. Mbuyiseni didn’t do that. All we were fighting for was to enter the cemetery and go and bury our mother,”  the EFF leader said.

The lobby group’s CEO, Kallie Kriel, on the other hand, brushed Malema’s defense off as yet another one of his pathological lies.

AfriForum further issued a statement, accusing the NPA of dragging their feet in leading the front with the prosecution.

“Although we welcome the NPA’s decision to prosecute, it is regrettable that AfriForum should exert so much pressure on them simply to fulfill their constitutional duty,” Gerrie Nel, the head of private prosecutions at AfriForum, said.

The State has since denied the lobby group’s claims, citing that due process must be followed in instituting charges and in their case, it was simply a matter of allowing time and process to run its course.

“As the NPA, we followed due processes. The matter was not trial ready, hence it was not enrolled. Investigations were ongoing and we had to wait for those investigations to be concluded before we could enrol the matter on the court roll,” NPA spokesperson, Phindi Mjonondwane said.

To further cement the strength of their accusations, AfriForum leaked the CCTV footage which showed Malema and Ndlozi in an altercation with several officers who manned the fort of the cemetary. You can watch it below, in full.