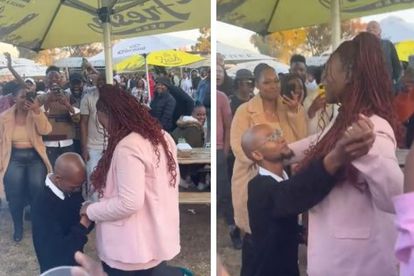 Yes, this beautiful moment was caught on camera at a farmers market. Watch the video below.

WATCH THE PROPOSAL WITH THE CROWD CHEERING

The marriage proposal at the Fourways Farmers market has since gone viral on social media!

Not something you would normally see at a Farmers market, and those who witnessed the proposal wasted no time getting their phones out to start snapping.

In the video the man is seen going down on his knee and asking his girlfriend to marry him.

The crowd is seen cheering the couple.

THE BEAUTIFUL MOMENT WAS CAUGHT ON CAMERA/S

South Africans loved that the beautiful moment was caught on camera.

Celine Edwards, a local chef from Pretoria, had a front-row seat, so to speak, to her sister’s engagement, which was taking place on a blustery day at Kogel Bay Beach in the Western Cape.

In her excitement to capture the wonderful moment on video, she lost her balance after stumbling over a rock. Once she lost her footing, she struggled to regain her balance. Meanwhile, the proposal was still taking place. Edwards’ sister was fighting back the tears of joy while she was fighting the force of gravity.

The video of the proposal went viral as soon as it hit social media and gave everyone a good belly laugh. It was even picked up by mainstream broadcasters. Eventually, the footage from Celine’s point-of-view also surfaced, which made for an interesting side-by-side comparison.

“I’m not a photographer, I’m actually a chef. It’s my sister and I just wanted to take a video of the engagement. I was so excited and I just fell. Three times.”