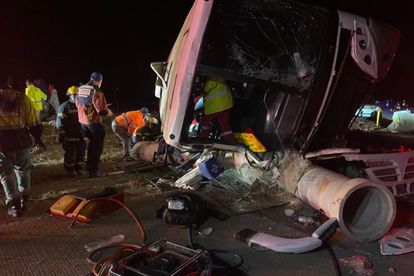 About 75 people were injured and a woman partially entrapped in the early hours of Monday when a bus coming from a wedding collided with cement barriers on the N2 in KZN.

BUS WITH WEDDING GUESTS HAD COLLIDED WITH CONCRETE BARRIERS

According to IPSS Medical Rescue, paramedics responded to reports of the bus accident shortly after 02:00.

“Shortly after 02:00 this morning, IPSS Medical Rescue received calls for another accident at the traffic diversion on the N2 Umhlali River Bridge.

“On arrival IPSS Medical found that a fully laden bus carrying wedding guests from Umzimkulu to Nongoma had collided with the concrete barriers and overturned.”

It said assistance was immediately requested from other services and EMRS.

A WOMAN WAS PARTIALLY ENTRAPPED UNDER THE BUS

“IPSS Advanced Life Paramedics worked to stabilize a critically injured passenger who was partially entrapped under the bus whilst KDM Fire extricated her.”

Six patients in various conditions were transported to a local hospital for further care by IPSS, Alert, and Taurus transported a further three patients.

Medi Response said it was established that a bus had been traveling from Umzimkulu to Nongoma when it struck a barrier and overturned.

The South African Police Services were on the scene and will investigate further.