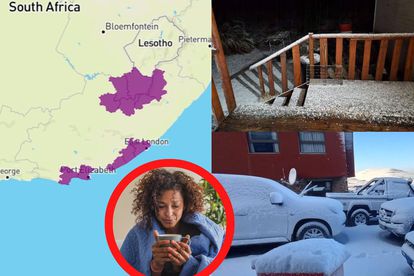 Very COLD weather is still expected on Monday and the rest of the week in several parts of the country.

“Angora and small stock farmers are advised to shelter small stock until Monday. Hikers and outdoor recreational activities will be exposed to these conditions and may contract Hypothermia if precautions are not taken.”

It furthermore warned of slippery roads resulting in minor accidents along the mountain passes.

“Minor damages to properties/settlements can be expected along the coastal areas due to strong winds from Sunday into Monday.”

The cold weather was expected to continue until midnight on Monday.

“Small stock farmers to shelter animals. Pubic will need to dress warmly and ensure protection against wind-chill factors and rain, and also need to secure their properties. Drivers to be aware of possible slippery conditions along the mountain passes.”

THESE AREAS WILL BE AFFECTED ON MONDAY:

SNOWFALL WAS CONFIRMED ON SUNDAY

According to VoxWeather cold weather will continue on Monday and Tuesday, with another cold front moving in on Wednesday. It furthermore warned that more than 40mm of rain is expected in parts of the Western Cape on Thursday.

According to VoxWeather, this is the third cold front over the weekend. The second cold front made landfall on Friday morning and brought scattered showers and COLD conditions to the Western and Southern Cape.

VoxWeather said there was a significant drop in temperature reaching Gauteng on Sunday.

Meanwhile, the South African Weather Service (SAWS) warned that snowfall is also possible over the high-lying areas of the Cape Provinces.