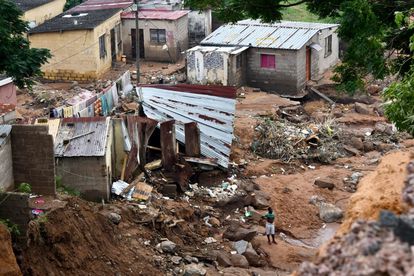 Warning! Heavy rainfall amounts exceeding 20 mm are expected for KwaZulu-Natal for the weekend. This comes as the province was still recovering from the deadly floods last month.

THIS WARNING COMES AFTER THE DEADLY FLOODS IN KZN LAST MONTH

In April, heavy downpours in parts of KZN left behind a trail of destruction – destroying critical infrastructure and washing away thousands of homes.

More than 440 people have lost their lives in the floods, while others remain unaccounted for.

According to the SA Weather Services, thunderstorms, combined with strong, gusty surface winds, are expected over the central interior by Friday afternoon. This will spread to Gauteng, Mpumalanga, and KwaZulu-Natal in the evening and parts of Limpopo by Saturday.

“Warnings in this regard will be issued if necessary. Due to the pre-existing condition of water-saturated soils in parts of KwaZulu-Natal, rainfall amounts exceeding 20 mm are likely to lead to localised flooding.

“It is therefore important for communities to take the necessary precautions to prepare for such conditions,” it said.

BITTERLY COLD CONDITIONS ARE EXPECTED TO MOVE IN ON THURSDAY

Bitterly cold conditions are expected to move in over the western and southern parts of the country on Thursday, spreading to the central and eastern parts by Friday and Saturday.

The SA Weather Service furthermore said small stock farmers should be advised of these conditions and take the necessary precautions.

The rainy conditions are expected to continue over the eastern parts of Limpopo and Mpumalanga and the northern parts of KwaZulu-Natal during Sunday.

“The public can look forward to a general clearing of weather conditions as well as a recovery in daytime temperatures from Monday onwards as the system exits the country.”

President Cyril Ramaphosa admitted earlier this week that government should have been better prepared for the devastation spurred by the KwaZulu-Natal – and that the disaster highlighted the need for them to be “disaster ready” in the event of a similar occurrence.

PRESIDENT ADMITTED THAT GOV SHOULD HAVE BEEN BETTER PREPARED

Ramaphosa spoke at the Presidential meeting with the Durban Chamber of Commerce and Industry in Durban on Sunday, 15 May 2022.

The government has implemented a range of measures in response to the floods, but President Cyril Ramaphosa and his cabinet have still come under immense criticism. He says the government, including municipalities, will be reviewing and submitting their disaster management and contingency plans to the National Disaster Management Council.

Ramaphosa said another issue also under discussion is the scope for provinces and municipalities to delegate certain disaster relief functions to well-capacitated institutions if they lack the capacity.

ALSO READ: Ramaphosa: KZN floods proved government ‘not as ready as it should be’