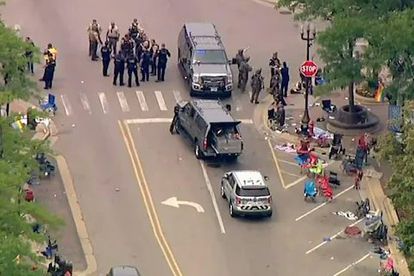 A July 4th parade (Independence Day) in the suburb of Highland Park in Chicago, Illinois, USA has left six people killed and 24 wounded after a male opened fire on the crowd.

The shooter described as a white male with dark hair, aged between 18 and 20, is reported to have fired a high-powered rifle from a rooftop 10 minutes after the Fourth of July parade kicked off on Monday morning.

According to USA Today, hundreds of federal, state and local officers were involved in the manhunt as the shooter remains at large.

A local resident, Miles Zaremski told Chicago Sun-Times that he heard 20 to 25 shots, “which were in rapid succession,” he said.

He also described that people who got shot, including a woman (who did not survive) were covered with blood.

People have been urged to avoid Downtown Highland Park and remain in places of safety until the shooter has been apprehended.

American politician and businessman Rep. Brad Schneider reacted to the crisis, “Hearing of loss of life and others injured. My condolences to the family and loved ones; my prayers for the injured and for the community; and my commitment to do everything I can to make our children, our town, and our nation safer. Enough is enough!” he tweeted.