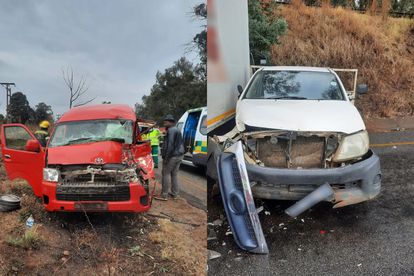 Four vehicles were involved in an accident in Walkerville on Wednesday. Photo: ER24.

Four vehicles were involved in an accident in Walkerville on Wednesday. Photo: ER24.

Four vehicles were involved in a crash that left approximately 25 people injured in Gauteng on Wednesday morning, 3 August.

According to paramedic service, ER24, the multi-vehicle crash occurred on the R550 road in Walkerville at approximately 10:18. Two taxis, a truck and a bakkie were allegedly involved in the accident.

When paramedics arrived at the scene of the crash, the bakkie and truck were lying in one lane while the pair of taxis were found on opposite sides of the road.

“Medics assessed the numerous patients walking around on the scene and found that approximately twenty-five patients had sustained minor to moderate injuries,” said an ER24 spokesperson.

None of the patients suffered serious or fatal injuries in the crash and were treated at the scene before being transported to nearby hospitals for further medical treatment.

“Local authorities were on the scene for further investigations,” said the paramedic service.

In an unrelated incident in Limpopo, approximately 100 people were injured when a bus overturned on the N1 Highway near Louis Trichardt in the early hours of Tuesday.

Paramedics found the patients scattered around the bus. Their injuries ranged from minor to serious. A triage area was set up at the scene to allow treatment.