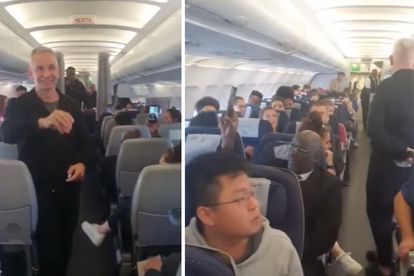 VIRAL VIDEO: Look what happens to these passengers on Cape Town flight Photos:Screeshots/Video/Facebook

VIRAL VIDEO: Look what happens to these passengers on Cape Town flight Photos:Screeshots/Video/Facebook

A video of the Stellenbosch choir, who recently started singing an anti-apartheid protest song during a flight, went viral.

THE VIRAL VIDEO WAS TAKEN ON MONDAY MORNING

The goosebump video was shared all over social media by Tuesday.

According to the information shared with the video, the video was taken during a SA 303 flight on Monday morning to Cape Town.

In the video, the choir can be seen singing “Weeping” an anti-apartheid protest song, before they continue with the National Anthem of South Africa – “Nkosi Sikelel’ iAfrika.”

THE OTHER PASSENGERS CAN BE SEEN ENJOYING THE SINGING

South African Airways also posted the video on Monday with the following caption:

“Stellenbosch University Choir on our flight to Cape Town. It was a pleasure having you onboard. We look forward to welcoming onboard soon.”

Did you know that “Weeping” was written by Dan Heymann in the mid-1980s and first recorded by Heymann and the South African group Bright Blue in 1987?

The song was a pointed response to the 1985 State of Emergency declared by President P.W. Botha, which resulted in “large-scale killings of unarmed and peaceful demonstrators against racial discrimination and segregation in South Africa.”

DID YOU KNOW THAT THE SONG WAS WRITTEN IN THE MID-1980s?