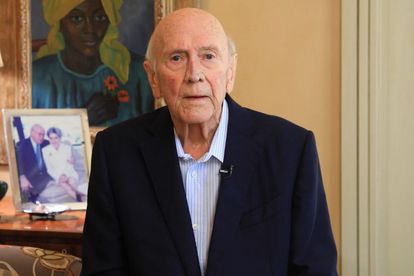 As The South African reported on Thursday, F.W. de Klerk passed away aged 85 after a long battle with mesothelioma cancer. Mzwanele Nyotsho says the former DA leader should not be honoured with a state funeral.

The 85-year-old was Mzansi’s head of state during the Apartheid years between 1989 to 1994. The later former President’s death was announced by his foundation on Thursday, before an emotional apology video from the late politician was posted.

“The former president died earlier this morning at his home in Fresnaye after his struggle against cancer. He was 85-years-old. He is survived by his wife Elita, two children Susan and Jan, and his grandchildren,” his foundation announced on 11 November.

The update was soon followed by an apology from the late de Klerk for the pain Apartheid inflicted on South Africa’s black, coloured and Indian citizens.

“Let me today, in the last message repeat: I, without qualification, apologise for the pain and the hurt, and the indignity, and the damage, to black, brown, and Indians in South Africa,” the late statesman said.

NO MERCY! MZWANELE NYOTSHO SAYS THROW HIS BODY IN THE SEA

It did not take long for de Klerk’s death to begin discussions and arguments against a state funeral. According to the opposition, the deceased politician’s Apartheid legacy is enough to disqualify him from a state funeral, despite his crucial role in signing peace agreements and reconciliation with Nelson Mandela’s ANC during the final days of racial segregation.

Asked what his message was to the nation and de Klerk’s family. The PAC president Nyotsho responded with a brutal attack on the 85-year-old.

“No, we don’t care about de Klerk’s death. Our hearts are with his victims,” Nyotsho said.

“The Africans he killed, in particular, the five kids he killed in 1993 and he confessed about that.

“I personally opened a case against him last year. So we don’t care about him. Our hearts are with his victims. We wish that his remains are thrown in the sea but of course not in the African waters, beyond Africa.

“I hope this ANC won’t give him a state funeral after killing so many Africans. We don’t care about de Klerk.”

Asked if the former president should have been prosecuted for the crimes, Nyotsho said of course, including all the legal representatives who hanged innocent Africans.

“Remember de Klerk confessed that he was misled by intelligence to kill those people. If parliament decides to have a moment of silence for him, as the PAC we will not stand up. I will be seated down,” he concluded.