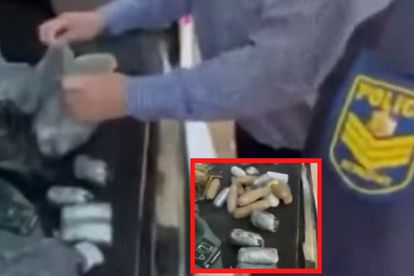 A video of a police officer caught on camera dealing with drugs has been arrested in Cape Town.

WATCH THE VIDEO OF A POLICE GETTING CAUGHT DEALING WITH DRUGS

According to police spokesperson Captain Frederick Van Wyk, the police officer was arrested on 28 June 2022.

“Members attached to the Anti-Corruption Investigating Unit held observation outside Cape Town Regional Court. The purpose of the observation was to monitor an operation.

“During the morning, a member in SAPS uniform was observed placing a bag inside a White VW Caravelle. The member was identified as a Sergeant attached to the Cape Town Regional Court.

“On completion of the operation, the vehicle was approached. Whilst members were at the vehicle, the sergeant approached them. Members identified themselves and permission was asked to search the vehicle.”

Van Wyk said the bag was opened and it contained dagga, tik and mandrax tablets wrapped in plastic.

“The illegal substances were seized and handed in as exhibits. The member was arrested and was detained at Woodstock SAPS. He appeared in the Cape Town Magistrates Court on 29 June on a charge of dealing in drugs.”

The police officer was detained at Table Bay Harbour SAPS.

Meanwhile, the provincial management of the Gauteng South African Police Service (SAPS) was left red-faced after a police officer stationed in the province was arrested for abuse of state resources without authority. He was found drunk inside a police vehicle in another province.

The police officer, who is a member of the Alexandra Police Station, was found drunk inside a marked state vehicle in Limpopo on 3 July 2022.

“Preliminary investigations revealed that the member utilised the station’s vehicle without authority to travel to another province.”

The 36-year-old police officer, who holds the rank of Sergeant, was arrested in Masemola, Limpopo. He faces a case of using a motor vehicle without the owner’s consent and a departmental case has been opened against him for further investigation.

ALSO READ: Cop arrested after being found DRUNK in a vehicle he took from Gauteng to Limpopo