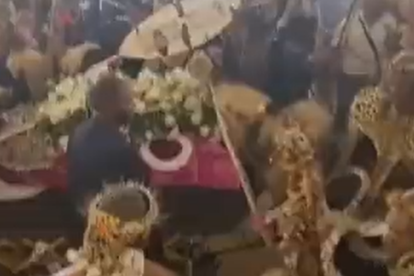 A fitting send-off for a cultural warrior. Image: @Verbzungu / Twitter

A fitting send-off for a cultural warrior. Image: @Verbzungu / Twitter

The highly revered leader earned fame when he led Amabutho during the burial of the late King Goodwill Zwelithini in March this year.

“His passing evokes great sadness and indeed anger amongst many as we feel robbed of a proud glistening nguni gem.”

The late leader is also honoured for having been one of the stakeholders during the preparations of commemorations such as the battle of Isandlwana and Umkhosi weLembe.

Mgilija Nhleko was hospitalised in August 2021 at the St Benedict Hospital in Nongoma. He was given medical attention for stress and other ailments. Doctors subsequently found that he was also suffering from tuberculosis (TB) of the joints.

It is suspected Nhleko suffered deep distress after he was fired for allegedly questioning the authority of King Misuzulu during a television interview.

He was also slammed for leading regiments to Nkandla home of former President Jacob Zuma before Zuma gave himself up to the police.

Zihogo Nhleko, who is affectionately known as “Mgilija” and is believed to have been born and raised in Mona, East of Nongoma, in the northern KwaZulu-Natal in 1949.

Masses gathered at Amabutho at Nhlalangwenya village in uPhongolo, north of KwaZulu-Natal to mourn the falling of a giant tree.

One of Mgilija Nhleko’s sons, Mbongeni Nhleko, outlined the late leader’s legacy that improved basic living conditions for families in his home village.

“When we first moved to this village it had no network and electricity, but he made sure that changed. We now have houses and lights and we know he was hoping for more for his village,” he said.