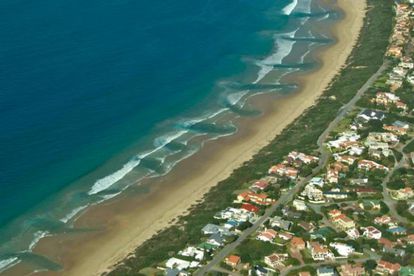 With summer in full swing, many of us will be heading to the beach to bask in the sun and swim in the sea.

And while this is a mostly fun and safe way of making the most of the warm weather, there are some potential dangers to be aware of, some of which are more difficult to spot than others.

Amongst these dangers are rip currents, which often go unnoticed by swimmers until it’s too late.

WHAT IS A RIP CURRENT?

According to the NSRI rip currents are able to develop where there are breaking waves. Bigger waves produce stronger currents, and these “rivers” of current are produced by water moving from the beach back out to sea.

“They happen all the time at many beaches and are the biggest danger that visitors face in the water. Often rip currents move slowly enough to barely be detected. But given the right circumstances of waves and beach profile, they can develop into currents moving at speeds of up to 2 metres per second – faster than any of us can swim.

“Ranging in width from just a few meters to a hundred meters, they pull to just behind where the waves form and then lose their power. A rip current is not the same as a riptide which is formed as the tide ebbs and flows through a narrow opening such as an estuary. The Knysna Heads is a great example of where you will find extremely dangerous rip tides,” the NSRI said.

HOW TO SPOT A RIP CURRENT:

WHAT TO DO IF YOU ARE CAUGHT IN RIP CURRENT