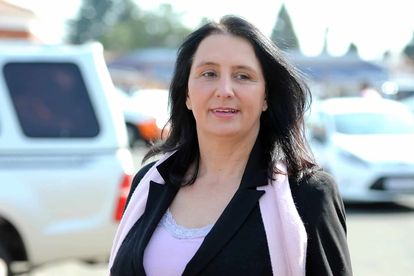 Vicki Momberg might be in the market for a new legal representative, after Advocate Kingdom Onah, her lawyer, submitted an application to stop representing her.

As reported by Times Live, Momberg and Onah have had their differences but, on Wednesday, tensions between the two tipped the scales.

What’s caused a rift between Vicki Momberg and her attorney?

Since Momberg was convicted of crimen injuria in 2018, Onah has been by her side. He even claimed responsibility for getting her released on R2 000 bail, after only serving four months of a two-year stint.

All of this done on a pro bono basis. But Onah, when he left the Randburg Magistrate’s court, made it abundantly clear that Momberg had shown him utter disrespect in court and that he was intent on withdrawing himself as her representative.

So, where did it all go wrong? Well, according to Onah’s application, Momberg has failed to communicate further instructions in preparation for her upcoming high court appeal that is in March.

According to Onah, a letter was sent to Momberg, requesting that she indicate the undertaking of the advocate who’d be representing her at her appeal.

Momberg: “He is incompetent”

After many attempts to get cooperation from Momberg, Onah says the last letter was sent to Momberg on Wednesday, 14 November 2018. However, she failed to attend to this.

“Considering that we have not received any response on the aforementioned correspondence, Onah Attorneys Incorporated has resolved to withdraw its services and as such shall henceforth deliver its notice of withdrawal as attorneys of record,

“We gave her sufficient time. A notice of withdrawal was sent to her and the high court in November. That is more than three months,” Onah said.

Momberg, in her defense, noted that Onah was too incompetent but that it was too late for him to withdraw.

“I’m not happy with him as an attorney because of various incompetencies,” she said.

Magistrate Pravina Raghunandun confirmed that he will consider Onah’s application. However, more importantly. Momberg was ordered to submit the signed letter from the advocate who is going to represent her at the appeal.