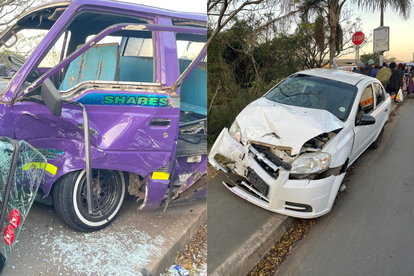 Drivers of two vehicles came to blows following a collision at the Russom and Moss Street intersection in Verulam in KwaZulu-Natal (KZN) on Thursday afternoon.

According to Reaction Unit South Africa (RUSA), its members arrived on scene at 16:52 and found the drivers of a purple Toyota Hiace taxi and a white Chevrolet Aveo involved in a fist fight.

“Both drivers blamed each other for failing to stop at the intersection. The minibus taxi was fully laden and crashed into a light pole after the initial impact. The occupants of both vehicles were not injured.”

In a separate incident, thirteen people sustained minor to serious injuries in a collision involving a taxi and a light motor vehicle on the M4 Ruth First Freeway in Durban, KZN recently.

“Paramedics used life-saving interventions to stabilise the woman after using hydraulic rescue equipment to free her from the wreckage. They stabilised the patient on the scene and transported her to a hospital for further medical treatment.

“Emergency responders stabilised twelve taxi passengers also injured in the collision. Paramedics transported the patients to a nearby Durban hospital for further treatment.”

Jamieson added that the exact cause of the accident is unknown. KZN police were not immediately available for comment.

ALSO READ: KZN woman killed after being dragged by a water tanker in a freak accident