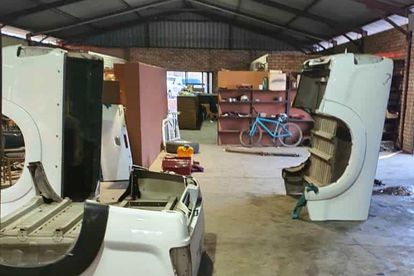 A father and son whose family business is alleged to have been an illegal vehicle chop shop on the East Rand have been arrested, together with an employee.

The trio were detained in the residential suburb of Crystal Park in Benoni on Friday afternoon after law enforcement authorities found evidence of 12 vehicles that had either been reported stolen or hijacked.

Stolen or hijacked over the past two years

All the vehicles were taken between 2018 and 2020 and reported at police stations in Garsfontein, Germiston, Randburg, Langlaagte, Lyttleton, Roodepoort, Honeydew or Zonkeizizwe.

Variety of vehicle models had been stripped

“On arrival [at the property], the team found one employee driving a Toyota Hilux carrying two engines that had been tampered with. The van was immediately profiled and confirmed as a vehicle that was stolen and reported at Honeydew SAPS in June 2018,” Brigadier Peters said.

“The team then proceeded to the workshop and found 11 more vehicles that were stripped of their parts. The vehicle models ranged from Toyota Hiluxes to Isuzus and Ford Rangers.”

The father and son, aged 65 and 40, were arrested at the scene. So too was the 43-year-old employee.

All are expected to appear before the Benoni Magistrate’s Court tomorrow (Monday) on a charge of possession of stolen vehicles.

Police have urged consumers to be vigilant when shopping for vehicle parts, especially from popular ‘cheap’ workshops, as these auto parts could be the proceeds of often violent hijackings and theft of motor vehicles during robberies.