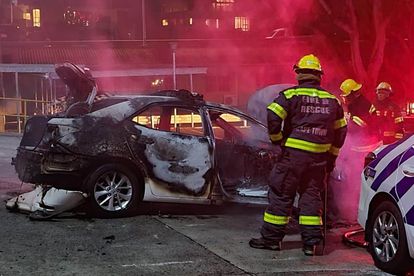 At approximately 20:17, a Cape Town traffic services vehicle caught fire at the Gallows Hill Traffic Department in Green Point. While it was completely destroyed, another was only partially damaged.

“One of the cars was completed destroyed by the fire and a second car was partially damaged. The incident is being investigated, no injuries were reported,” he added.

Apart from the fire at Gallows Hill, a raging fire in Brakpan, Gauteng destroyed seven businesses on Friday morning 12 February 2021. The blaze almost gutted a block of flats too but firefighters were able to save it.

Ekurhuleni EMS spokesperson William Ntladi told The South African that multiple stores and businesses were burnt down completely. When asked for a specific number, he said seven. Ntladi said the fire spread to a multi-storey block of residential flats in Brakpan as well, however, firefighters managed to control the blaze. The building was eventually saved, he said.

Members from five fire stations were present at the scene and a total of nine fire engines were used. While the exact cause of the fire is being investigated, Ntladi said the fire is suspected to have started in one of the stores. He said one of the businesses sold furniture so the fire may have emanated from there.

He went on to say that all the stores were still closed when the fire broke out. Luckily, there were no injuries or fatalities reported.