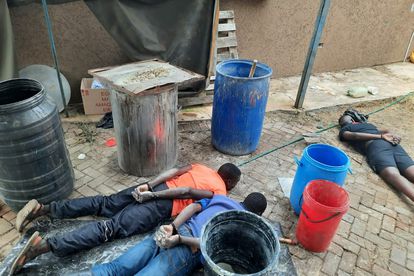 Hawks spokesperson, Captain Ndivhuwo Mulamu said the investigation team kept surveillance at a positively identified premises where suspicions of drug activities were reported at Ardenworld in the Vanderbijlpark area.

Mulamu added that a search and seizure operation was executed where the suspects were pounced on allegedly manufacturing mandrax powder in the premises.

The court remanded the accused in custody pending investigation and the case was postponed to Wednesday, 16 March 2022 for Mokoena’s formal bail application.

NARCOTICS WORTH R1 MILLION SNIFFED OUT

Meanwhile, endeavours to safeguard communities and rid the streets of the Western Cape of drugs yielded positive results. Police confiscated more than R1 million worth of drugs in Beaufort West.

“A search ensued when a trained narcotic police dog, Bruno, reacted positively on a box inside the vehicle.”

Spies said the SAPS members opened the box and found ten bags with 10 000 mandrax tablets, with an estimated street value of R500 000-00, inside.

“This discovery led to an intensive search of the vehicle and a further ten boxes of Khat estimated at R570 000-00 were discovered on board.”

He said police confiscated the drugs and arrested two occupants of the vehicle on charges of dealing in drugs.

ALSO READ: Woman nabbed with almost half a million rand worth of drugs