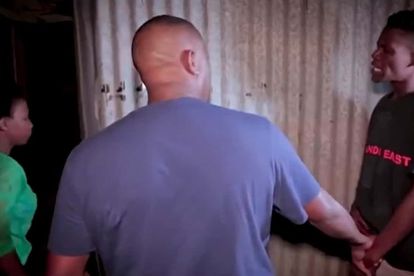 Jub-Jub on the set of his new show Uyajola 9/9 / (Photo: Screenshot taken from the show’s trailer)

Jub-Jub on the set of his new show Uyajola 9/9 / (Photo: Screenshot taken from the show’s trailer)

In its debut season, Uyajola 9/9, a reality TV show hosted by former rapper, Jub-Jub, has already caused heartache and discontent from people who want it stricken off DStv’s Moja Love channel.

As reported by Times Live, the show’s host, Jub-Jub, has found himself at odds with the leader of Black First Land First (BLF) for the apparent ‘anti-black’ statements he made in the past about Xhosa people.

As if BLF leader, Andile Mngxitama is not a big enough headache to deal with, the show has also been targeted by a group of disgruntled viewers who have launched a petition to have it cancelled.

Uyajola 9/9 and Jub-Jub get flak from haters

Why BLF want to sue Jub-Jub

Let’s start with the BLF issue. Slander about Xhosa people has been a feature of social discourse on ‘Black Twitter’ for a long time.

Of course, the things said about how Xhosa people are supposedly the loudest, rudest and most unfaithful ethnic group are all in jest.

However, for Mngxitama, Jub-Jub’s comments in a video he uploaded a long time ago prove that he is not educated on black consciousness.

The part that triggered Mngxitama was when the show’s host said he had “never seen a nation that is so promiscuous like the Xhosas”.

“He needs to understand why what he said was wrong. I was hearing what this guy was saying and I was shocked that such comments would be allowed. You can’t condemn a whole group of people in the manner that he did.

“He said that they are promiscuous and stubborn. That is not permitted. You cannot say this about black people. He tried to cancel his premeditated insults by saying that Xhosa people are nice… No. It is not on. This is tribalism and anti-black,” was Mngxitama’s scathing response to Jub-Jub’s joke.

Related: “We did it for money” – Uyajola 9/9 responds to claims of ‘fake show’

The BLF leader gave Jub-Jub and Moja Love five days to issue a public apology or face a lawsuit in the equality court.

Why viewers want the show cancelled

Another threat Jub-Jub and Moja Love have to deal with, comes in the form of a petition that only needs 20 signatures to get to its goal of 1 000.

Kholofelo Masha launched the petition, calling for supporters to participate in his mission to have the ‘destructive’ show stricken off the DStv channel.

“This show violates our privacy. It destroys families and lives in general. Sign this petition to have it taken down from our TV,” he wrote.

Thus far, there has been no indication from the cable network or the channel, that the petition will hold any steam since Uyajola 9/9 has become one of the most popular shows on DStv.

What is Uyajola 9/9 all about?

The Uyajola 9/9 show allows frustrated partners the opportunity to find out if his or her other half is a cheater or not. The show follows an intensive investigation into the shady movements of the suspected partner.

Once all the evidence has been collected, it is the host’s responsibility to break the bad news to the concerned partner. In the last two episodes, we saw a man whose wife of many years has been cheating on him make threats to the lover.