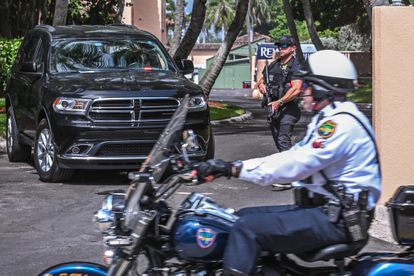 Secret Service and local law enforcement officers are seen in front of the home of former President Donald Trump at Mar-A-Lago in Palm Beach, Florida on 9 August, 2022. – Former US president Donald Trump said 8 August, 2022 that his Mar-A-Lago residence in Florida was being “raided” by FBI agents in what he called an act of “prosecutorial misconduct.” Photo: Giorgio VIERA / AFP

Secret Service and local law enforcement officers are seen in front of the home of former President Donald Trump at Mar-A-Lago in Palm Beach, Florida on 9 August, 2022. – Former US president Donald Trump said 8 August, 2022 that his Mar-A-Lago residence in Florida was being “raided” by FBI agents in what he called an act of “prosecutorial misconduct.” Photo: Giorgio VIERA / AFP

FBI agents seized records marked “top secret” during their search of former president Donald Trump’s Florida estate, according to documents made public Friday in a probe that includes possible violations of the US Espionage Act.

The search warrant and related materials, unsealed by a Florida judge, showed agents carted away a significant number of items from the raid, which ignited a political firestorm in an already bitterly divided country.

The warrant, which was personally approved by Attorney General Merrick Garland, authorized the FBI to search the “45 office” — a reference to the 45th US president’s private office at his Mar-a-Lago residence — and storage rooms.

It directed them to seize documents and records “illegally possessed” in violation of three criminal statutes, including one falling under the Espionage Act, which makes it a crime to illegally obtain or retain national security information.

Trump, who is weighing another White House run in 2024, vehemently denounced the FBI raid on his Florida home and claimed that all of the material confiscated during the search had been previously “declassified.”

“They didn’t need to ‘seize’ anything,” “They could have had it anytime they wanted without playing politics and breaking into Mar-a-Lago.”

he said in a statement on his Truth Social platform

Legal experts cautioned that while the warrant cites the Espionage Act, any potential charges remain unclear and Trump is not necessarily suspected of espionage.

“The Espionage Act encompasses a ton of crimes that have nothing to do with ‘spying,'” “It’s about unlawful storing of information relating to the national defense.”

Orin Kerr, a law professor at the University of California, Berkeley, agreed, saying the “Espionage Act is a pretty broad law about mishandling classified documents, not just espionage.”

Among the records seized during the raid were documents marked “Top Secret,” “Secret” and “Confidential.”

Some of the papers were marked “SCI” — sensitive compartmented information — meaning they were meant to be viewed only in secure government facilities.

FBI agents also seized binders of photos, a handwritten note, information about the “President of France,” and the grant of clemency made by Trump to Roger Stone, an ally of the former president, according to the list.

The Justice Department had asked a federal judge to unseal the search warrant on Friday barring objections from Trump.

The 76-year-old Trump did not block the release, but complained that he was the victim of “unprecedented political weaponization of law enforcement” by “radical left Democrats.”

Leading Republicans have rallied around Trump and some members of his party have accused the Justice Department and FBI of partisanship in targeting the ex-president.

In an attack that appeared to be a direct response to the FBI search of Mar-a-Lago, an armed man tried to storm an FBI office in Cincinnati, Ohio on Thursday.

The assailant, who was shot dead by police after an hours-long standoff, reportedly posted on Truth Social that he hoped his actions would serve as a “call to arms.”

Garland on Thursday criticized what he called “unfounded attacks” on the FBI and the Justice Department while FBI Director Christopher Wray, a Trump appointee, denounced “violence and threats against law enforcement.”

The Justice Department typically does not confirm or deny whether it is investigating someone, and Garland took pains to emphasize that the law was being applied fairly to Trump.

In addition to investigations into his business practices, Trump faces legal scrutiny for his efforts to overturn the results of the November 2020 election, and for the 6 January, 2021 attack on the US Capitol by his supporters.

Trump was impeached for a historic second time by the House after the Capitol riot — he was charged with inciting an insurrection — but was acquitted by the Senate.