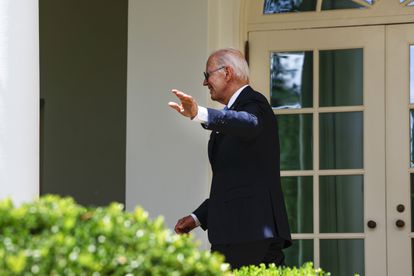 Audio-bombed by a barking pet dog, wondering if he looks OK on video conference, and finally being allowed to hit the gym — Joe Biden may be the most powerful man in the world but the ups and downs of Covid isolation are the same as for anyone else.

Tuesday was Biden’s fifth day confined to quarters and his doctor, Kevin O’Connor, said the president has now completed a five-day course of the therapeutic Paxlovid, with nearly all symptoms of the coronavirus gone.

O’Connor said in a memorandum.

Biden is expected to be released from isolation once he’s had a negative test.

But little question that the 79-year-old is already beyond ready, at least mentally.

While the doctor focused mostly on items like healthy oxygen saturation, pulse and temperature, the line really speaking to Biden’s state was that he “feels well enough to resume his physical exercise regime.”

Unlike his predecessor Donald Trump, who mused that gyms and the like may actually be bad for you, Biden works out every morning, as well as taking gentle bike rides at home in Delaware on weekends.

“He asked last night to exercise,” Press Secretary Karine Jean-Pierre said. “He likes to do weights, he likes to do the treadmills.”

The announcement last week that he had tested positive for Covid-19 meant Biden had to cancel domestic travel plans and reduce work hours in the White House, although staff emphasized that he continues to carry out full duties.

Although he is expected to return to working in person this week, Tuesday was another virtual day, with the president meeting executives from South Korean giant SK on plans to invest $22 billion in semiconductors and other high-tech industries.

While visitors and senior staff gathered in the White House’s Roosevelt Room, Biden appeared on a video screen, laughing as he pointed out that he was in fact just a few doors away in the same building.

“I can walk out to the balcony and holler at you,”

Between discussing weighty issues of South Korean-US ties, Biden revealed the more human aspects of working from home that would be familiar to much of the planet over the last couple years.

“I’m feeling great. I hope it comes across” “I hope I look as good as I usually do, which is not that good.”

Then during an exchange with the executives on skilled workforces, a loud dog bark — possibly Biden’s German Shepherd Commander — was heard interrupting the live feed.

Jean-Pierre said Biden is clearly on the mend.

“It brought a smile to my face when I saw he wants to work out,”