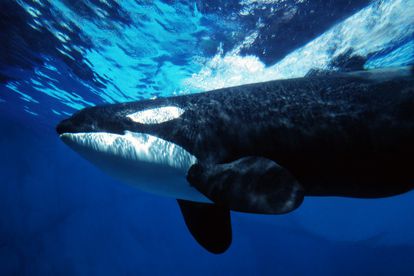 Imagine almost being swallowed by a humpback whale and still live to tell the tale – Michael Packard, a veteran lobster diver did and has spoken about his experience.

It was an ordinary day for Packard on Friday, 11 June 2021, when he decided to go his second dive off the coast of Cape Cod in Massachusetts.

The 56-year-old told Cape Cod Times that he saw schools of sand lances and stripers swimming by, when diving down, into the water.

“All of a sudden, I felt this huge shove and the next thing I knew it was completely black,” he recalled.

“I could sense I was moving, and I could feel the whale squeezing with the muscles in his mouth,” he told the publication.

Michael Packard thought he was swallowed by a shark

Packard first thought he had been swallowed by a great white shark but said he couldn’t feel any teeth and wasn’t wounded – that’s when he realised he was actually inside the mouth of a whale.

“I was completely inside; it was completely black. I thought to myself, ‘there’s no way I’m getting out of here. I’m done, I’m dead.’ All I could think of was my boys — they’re 12 and 15 years old.”

Packard, who had an oxygen tank on him at the time of the incident, said it was likely that the massive sea creature ran into him by accident while searching for krill.

He said he was trapped for as much as 40 seconds in the whale’s mouth.

“I was almost convinced I was going to die that day,” he wrote on Reddit.

“Eventually, the whale managed to dislodge me by moving its head and tongue, I think. [It was] completely dark. I could’ve suffocated, or drowned if I didn’t retrieve my regulator in time.”

This wasn’t Packard’s first close call with death – in 2001, he survived a plane crash in Costa Rica killed three other people.