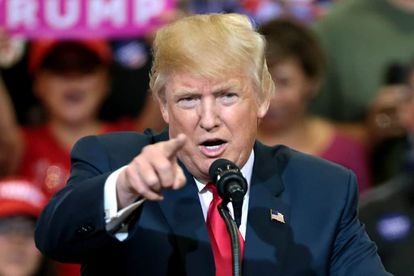 Fulton County prosecutors in the US state of Georgia are investigating attempts by former President Donald Trump to overturn results from last November’s election.

Trump was caught on tape telling the Georgia’s Republican Secretary of State Brad Raffensperger to “find” the more than 11,000 votes, enough to give him victory there.

“There’s nothing wrong with saying, you know, um, that you’ve recalculated.”

The official is heard replying that Georgia’s results are correct in the audio recording of the phone call obtained by the Washington Post.

Joe Biden’s win in Georgia and other swing states secured him the presidency.

Fulton County District Attorney Fani Willis sent a letter asking state officials to preserve documents including those relating to the phone call and saying that a criminal investigation was being carried out.

“I just want to find 11,780 votes,” Trump told Raffensperger in a recording of the call released by the Washington Post last month.

Raffensperger responded: “The challenge you have, Mr President, is that the data you have is wrong.”

In the months after the election, Trump, backed up at times by senior GOP figures, made a series of unsubstantiated allegations of widespread electoral fraud.

The call on 2 January came just four days before the US Congress confirmed Biden’s election victory.

News of the criminal charges against the former president coincides with Trump’s historic impeachment trial – on a charge of inciting last month’s deadly storming of the US Capitol began – which got underway Tuesday.

A House aide told reporters the testimony will include previously unseen Capitol security camera video that will “provide new insight into the extreme violence that everyone suffered, and really shows the extent of what Trump unleashed on the Capitol.”

The House managers have been allotted as many as two days to present their case.

Trump’s defense team will then have two days to make its arguments against convicting the former president.