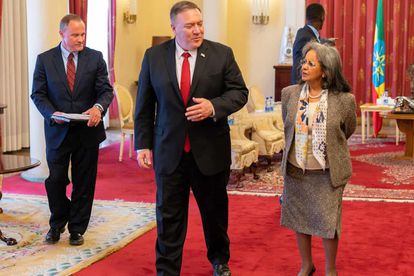 The US Secretary of State opened a can of worms on Wednesday, when he told an official UN event that land expropriation without compensation would be “disastrous” for South Africa. Mike Pompeo compared the plans to other “failed socialist projects” seen in Zimbabwe – but the EFF haven’t taken these remarks lying down.

The Red Berets have reacted furiously, publishing a statement on the matter earlier on Thursday. The bellicose tone attacks the Trump administration for “interfering” with foreign policy once more. The US government was also advised to “stop jailing children” at the Mexican border.

EFF hit back at Mike Pompeo

Both Pompeo and Trump have also been personally criticised for “almost starting World War III” following an escalation of conflict with Iran last month. It’s fair to say that the EFF are rustled by the US position on land expropriation:

“The regime of Pompeo and Trump detains minors at the border with Mexico, separating families and jailing children like animals. They are the ones who brought us to the brink of World War III. We are therefore not shocked that the destructive US state would be against the restoration of justice for black South Africans.

“Mike Pompeo must understand that we do not account to the US and our policy directives do not fall under his capitalist logic. He must instead stop waging war on African-Americans and Mexicans alike. The United States of America has too much blood on its hands to act as a leader of Africa.”

US and land expropriation

Mike Pompeo’s concerns continue the thread of interest his government colleagues maintain in South Africa. Not only has the American ambassador to South Africa mentioned that land expropriation has been discussed by the Trump administration, but The Donald himself tweeted about the matter in 2018. It seems the non-compensatory model of redistribution remains high on the US radar.

EFF Statement on the Senseless Utterances by the US Secretary of State Mike Pompeo on Land Expropriation. pic.twitter.com/zkRI1bUtJo