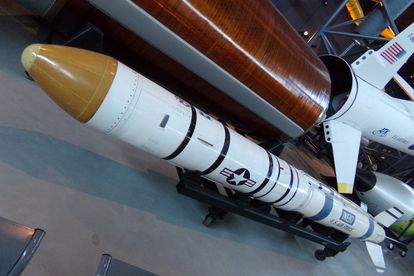 ASM-135 anti-satellite missile. Launched from an F-15 fighter on 13/9/85, a missile like this one brought down the US-owned Solwind P78-1 satellite in a demonstration test of US satellite killing capabilities. Photo: Ed Dempsey/Flickr

ASM-135 anti-satellite missile. Launched from an F-15 fighter on 13/9/85, a missile like this one brought down the US-owned Solwind P78-1 satellite in a demonstration test of US satellite killing capabilities. Photo: Ed Dempsey/Flickr

The United States announced a commitment to stop testing anti-satellite missiles that generate dangerous debris in space, a measure described Tuesday as “an important step” by the head of NASA.

The United States, the first country to make such a pledge, has encouraged other nations to follow its lead, with the goal of establishing “a new international norm for responsible behavior in space,” the White House said in a statement.

“This is especially important as there is an ever-increasing number of states and non-governmental entities that rely on space services and space assets which are vulnerable to debris.”

The announcement comes five months after Russia destroyed one of its own satellites in a missile test that created a cloud of debris and forced the seven crew on the International Space Station to temporarily take shelter in their return ships.

Washington denounced the strike as “dangerous and irresponsible.”

Russia and the United States are among the small handful of nations that possess the high-tech anti-satellite weapons known as ASATs. The missiles have also been used by China and India.

“There is no doubt that human spaceflight and the future of the space environment are incompatible with destructive direct-ascent ASAT missile tests,”

He dubbed the US measure “an important step forward to foster a safe, sustainable space environment,” and called on other countries to follow suit.

ALSO READ: US vows to curb China and Russia in space

The debris generated by anti-satellite strikes has the potential to collide with the thousands of satellites in orbit that are key to numerous systems, including communications and navigation.

The ability to destroy other countries’ satellites can, therefore, prove to be a strategic military asset and such tests fuel fears over the weaponization of space.