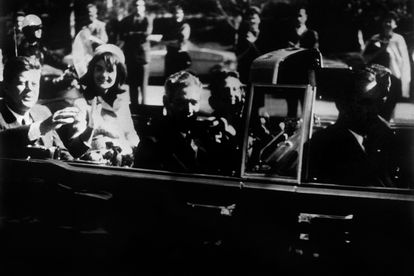 (FILES) Picture dated 22 November 1963 of US President John F. Kennedy and his wife Jacqueline, shortly before his assassination in Dallas. – The administration of US President Joe Biden on 15 December, 2021, released secret documents that may shed light on the 1963 assassination of President John F. Kennedy. The release of almost 1,500 documents still leaves more than 10,000 either partially redacted or withheld entirely. Photo: AFP

(FILES) Picture dated 22 November 1963 of US President John F. Kennedy and his wife Jacqueline, shortly before his assassination in Dallas. – The administration of US President Joe Biden on 15 December, 2021, released secret documents that may shed light on the 1963 assassination of President John F. Kennedy. The release of almost 1,500 documents still leaves more than 10,000 either partially redacted or withheld entirely. Photo: AFP

The CIA and FBI files show US investigators spread their net wide and deep to find out if Oswald conspired with others in the November 22, 1963 murder that shocked the world.

Documents show they chased down myriad leads, from Soviet intelligence to African communist groups and the Italian mafia.

The papers also show the extensive US efforts to spy on and influence the communist government of Fidel Castro in Cuba, where Oswald had contacts and which Kennedy had sought to overthrow.

The 1,491 files, many of them lengthy reports, were posted on the JFK Assassination Records page of the National Archives, which already has tens of thousands of listings related to Kennedy’s death and the investigation that followed.

Kennedy’s assassination has long given rise to numerous conspiracy theories that do not accept the official verdict that Oswald worked alone when he shot Kennedy as the young president was rolling through the streets of Dallas, Texas in a convertible limousine.

Some believe Oswald, a communist sympathizer, was put up to it by Cuba or the Soviet Union.

Others believe that anti-Cuba activists, possibly with support in US intelligence or the FBI, had Kennedy killed.

And still others believe his political rivals could have been at the root of the assassination.

Four years ago, then-president Donald Trump was legally bound by a 1992 law to release the information held back by US intelligence on the subject.

The law requires all government records on the assassination be disclosed “to enable the public to become fully informed.”

Trump declassified more than 53,000 documents in seven tranches, taking the portion of the entire assassination archive available to the public to 88 percent, according to the National Archive.

But Trump left thousands of others under wraps on national security grounds.

This year, President Joe Biden pledged to honor the law, but he too came under fire in October when the White House postponed more releases.

Biden said at the time the delay was necessary “to protect against identifiable harm to the military defense, intelligence operations, law enforcement, or the conduct of foreign relations.”

The White House is now under pressure to complete reviews of the documents before the end of 2022.

Philip Shenon, an expert in the Kennedy Assassination dossier, wrote in an article published by Politico on Wednesday that there are probably documents that will never be released for security reasons.

“So long as the government continues to keep some documents hidden, it will only further promote the idea that sinister conspiracies about Kennedy’s death have a basis in fact,” he said.

“Today, QAnon, which the FBI has deemed a domestic terrorism threat, has embraced JFK conspiracy theories,” Shenon added, referring to the US conspiracy movement that has in recent years crept into the mainstream.

Shenon estimated that 15,000 assassination-related documents remain classified, most of them from the CIA and FBI.

Jefferson Morley, who keeps a website on the assassination, JFKFacts.org, and  who has spent years in court seeking the declassification of documents, said the newest release still holds important records back.

“Neither Jackie nor RFK believed the official theory that Kennedy was killed by one man alone for no reason,” Morley wrote on Twitter.

“They said privately JFK was killed by his domestic enemies. That’s what’s on these tapes and why they are so sensitive.”