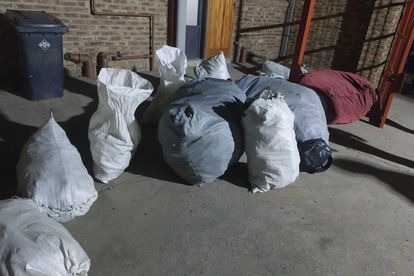 A Upington man was arrested and charged with the possession of protected plants after police searched a suspicious taxi with a trailer filled with bags.

According to police spokesperson Lt-Col Sergio Kock, policemen spotted the suspicious-looking taxi with a trailer filled with bags and immediately stopped and searched it.

“The vigilance of Sgt Riet and Const Hans from the Upington Magistrates Court netted a male taxi driver for illegal possession of protected plants.”

“The passengers allegedly confirmed that the bags belonged to the driver; hence he was arrested by the SAPS.”

THE DRIVER OF THE TAXI WAS ARRESTED AND CHARGED

He furthermore said the man should be appearing in the Upington Magistrates Court soon on charges of illegal possession of protected flora.

“He should be appearing in the Upington Magistrates Court soon on charges of illegal possession of protected flora. The investigation continues.”

DAGGA WORTH MORE THAN R100 000 CONFISCATED

Police spokesperson Captain Olebogeng Tawana said members found and confiscated dagga weighing 13.20kg during the search, including cash believed to be the proceeds of dealing in dagga.

Tawana said the man is expected to appear in the Kimberley Magistrate’s Court soon on a charge of dealing in dagga.