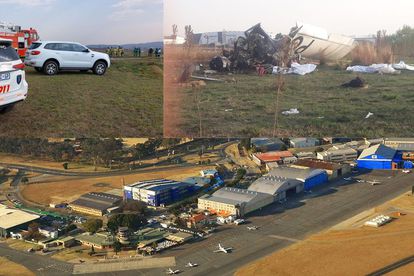 UPDATE: The cause of the HORRIFIC SAPS aircraft accident investigated Photos: Supplied

UPDATE: The cause of the HORRIFIC SAPS aircraft accident investigated Photos: Supplied

The Aviation Authorities (AA) are investigating the cause of the HORRIFIC SAPS aircraft accident that claimed the lives of five passengers on Tuesday.

Five people on board a SAPS aircraft were killed when it crashed near Rand Airport on Tuesday afternoon.

UPDATE THE CAUSE OF THE ACCIDENT WILL BE INVESTIGATED

According to sources on the scene, another person was critically injured and airlifted to a nearby hospital for further treatment.

“A SAPS Pilatus PC-6/B2-H4 Turbo Porter crashed shortly after taking off from the Rand Airport on Tuesday afternoon.”

The accident happened around 14:00 on Tuesday. Emergency services were still on the scene until later afternoon.

Police spokesperson Colonel Athlenda Mathe said they could sadly confirm that one of its fixed-wing aircraft crashed at the Rand Airport in Gauteng at 14:30 this afternoon.

“On board were five passengers and the pilot. All five passengers have sadly lost their lives. The pilot is critically injured and has been taken to a nearby hospital for further medical care. Authorities are on the scene to establish the cause of the accident.”

The identities of the deceased have not yet been released.

THE YOUNG PILOTS DIED ON IMPACT AFTER THEIR AIRCRAFT CRASHED

Family and friends will gather on Wednesday to celebrate the lives of Oyit and Bhadresh.

The memorial service will be held at the Algeo Flying Club in Port Elizabeth at 15:00 on Friday.

According to the police spokesperson Colonel Priscilla Naidu, the pilots left Dawid Stuurman Airport at about 18:15 on Saturday night on route to East London.

THE AIRCRAFT WAS LOCATED IN BUSHES ON A FARM IN KINKELBOS

“The pilots left Dawid Stuurman Airport at about 18:15 on Saturday night on route to East London; however, they turned the Sling 2 aircraft around at Kenton-On-Sea and headed back towards Gqeberha.

“At about 20:07, communication with the aircraft was lost, and at about 22:00, SAPS Search and Rescue team, including the Diving Unit and Gqeberha K9 unit, were mobilised to search for the missing aircraft.”