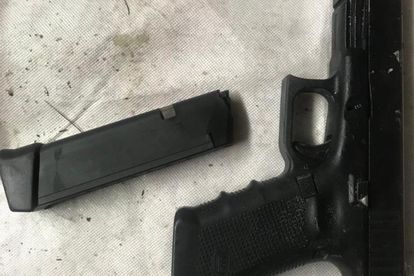 The man who is a suspect behind the killing of two correctional service officials was found in possession of one of their firearms. PHOTO: SAPS

The man who is a suspect behind the killing of two correctional service officials was found in possession of one of their firearms. PHOTO: SAPS

A suspect believed to be the killer of two Correctional Services officials was finally caught as he was trying to flee police.

The suspected killer was arrested in the East Rand on Wednesday, said police.

A multi-disciplinary team was in the Etwatwa area in Ekurhuleni on Wednesday. The team is made up of members form the Gauteng Murder and Robbery Unit, Organised Crime Investigations, Ekurhuleni Metro Police and officials from the Department of Correctional Services.

Police spokesperson Brigadier Brenda Muridili says the team spotted a Nissan Sentra, the same car which is what the suspected killer was reportedly travelling in.

But the Sentra immediately sped off when the driver noticed they are being followed, Muridili said.

“The team pursued and then cornered [the vehicle] on Eiselen Street. The suspect was apprehended and he was found with a firearm and ammunition that belonged to one of the murdered Correctional Services officials.”

The suspect was taken to his residence where an unlicenced firearm, believed to be the murder weapon, was seized.

“The two firearms will be taken to the Forensic Science Laboratory for ballistic testing.”

The suspect is expected to appear before the Tsakane Magistrate’s Court soon. He faces two counts of murder and possession of unlicenced firearms and ammunition.

On Tuesday, 12 July, two officials, Mr Faku and Mr Moliki, were tracing a parolee who was on the run. The officers of the Boksburg Community Correctional Services were however killed in cold blood at around 07:45.

According to Minister of Justice and Correctional Services, Ronald Lamola, the suspected killer stole a state firearm from one of the dead officials.

“The tremendous sense of loss is magnified by the tragic circumstances under which such a violent assault was unleashed against our official. I wish to send my heartfelt and deepest condolences to the families of the deceased and correctional officials,” said Lamola.

ALSO READ: SA prisons are overcrowded – but by how much?