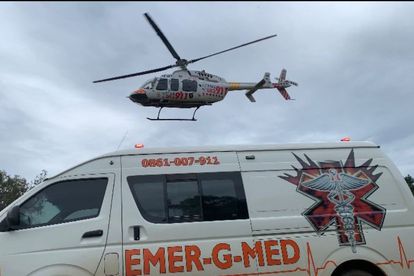 The man who fell at Menlyn Mall is in a critical condition and was airlifted to hospital. PHOTO: Emer-G-Med

The man who fell at Menlyn Mall is in a critical condition and was airlifted to hospital. PHOTO: Emer-G-Med

The man who fell from the sixth floor of popular mall Menlyn Shopping Centre succumbed to his injuries on Thursday.

The 31-year-old apparently fell inside the shopping centre and was taken to hospital in a critical condition.

“It is alleged that on [Thursday], the victim fell from level six at Menlyn Park shopping centre. He was declared dead at the hospital.”

The cause of the incident is not yet known at this stage, she said.

“An inquest docket is opened for investigation at Brooklyn police station,” she said.

According to Marty du Plessis, who was present at the mall, all they saw was blood. The man apparently fell next to the children’s Cartoon Network play area.

“Menlyn should barricade that particular spot. It’s the fourth suicide at Menlyn that I am aware of,” she said on Facebook.

MAN WAS FOUND IN A CRITICAL CONDITION

Emer-G-Med attended to a call at the popular shopping destination just after 08:00.

The man is in a critical condition, Emer-G-Med had earlier said.

“Advanced Life Support intervention was needed to stabilise him before he was placed onto a mechanical ventilator to assist him in breathing,” said the emergency service.

The injured man was airlifted by Netcare911’s aeromedical helicopter to a specialist facility for the necessary care that he required.

“The reason for the fall and the events preceding it are unclear and will form the subject of a South African Police service investigation,” Emer-G-Med said.

OTHER INCIDENTS HAVE OCCURRED AT POPULAR MALL

In 2019, a man was arrested for murder for allegedly killing someone at the shopping centre.

The alleged murderer shot someone in the parking lot of the mall.

The shooting allegedly happened after an altercation between the accused and two other people.

In 2018, a woman fell to her death at the Menlyn Mall, jumping from the sixth floor of the mall’s parking bay.

The woman was apparently spoken to by security guards and family members to try and talk her out of the jump.

She apparently dove over the rails as security guards tried to catch her by her feet. She unfortunately slipped through the security guard’s hands.

In 2014, a security guard working at the mall also jumped to his death inside the shopping centre.

According to his colleagues, the security guard, Skhumbuzo, appeared agitated before he jumped to his death.

“He was walking up and down on the first floor, constantly checking his phone. He then left and went to the top floor. In less than ten minutes, we saw his body coming down but we didn’t see him jump,” said a worker at a kiosk close to where the security guard landed.