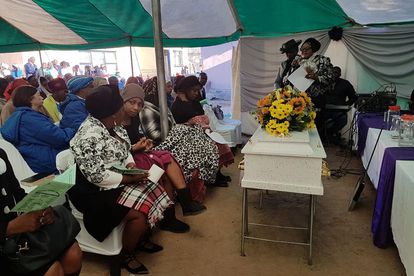 LIMPOPO – Three-year-old Omari Monono who drowned in a pit latrine being laid to rest.

LIMPOPO – Three-year-old Omari Monono who drowned in a pit latrine being laid to rest.

Omari Monono, the three-year-old who tragically lost his life in a pit latrine, has finally been laid to rest. The boy died at a relative’s house after his mother left him unattended in a pit latrine.

The DA announced that it was looking forward to visiting the family and that it was prepared to do what it could to tackle the issue of pit latrines still being used in the rural parts of Limpopo.

The political party has challenged Stan Mathabatha, who is the Premier of Limpopo, to help in replacing pit latrines in Limpopo’s rural environments with proper sanitation.

The shocking stats around pit latrines in Limpopo

Desiree van der Walt of the DA bore witness to the mother’s anguish. She stated that she was finding it hard to accept her son’s death.

While Desiree empathized with the mother’s loss, she stressed the fact that the statistics show a grim reality for many residents of Limpopo who live in rural environments.

“We know that over 900 schools in our province still use pit toilets only. We also know that 73% of the people in Limpopo have to rely on this poor quality of pit toilets and we must stop this”.

The story of Omari sparked an outrage across the country. People were perturbed by the realisation that there were still communities without proper sanitation in South Africa.

It was also revealed that this is not the first case of a child dying in a pit latrine. Viwe Jali, a five-year-old child from the Eastern Cape, drowned in a pit latrine at Luna Primary School in March of this year.

Michael Komape’s parents are currently fighting the case of their child’s death, who suffered the same fate at Mahlodumela Primary School in Limpopo.