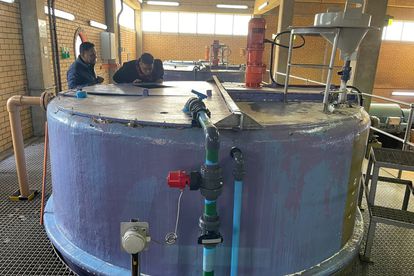 The Faure water treatment plant has been tested and water is now safe to drink. PHOTO: Twitter/@ZahidBadroodien

The Faure water treatment plant has been tested and water is now safe to drink. PHOTO: Twitter/@ZahidBadroodien

The City of Cape Town has lifted the precautionary boiling notice for parts of the city as their water is now safe to drink.

NO NEED TO BOIL AS IT IS NOW SAFE

The City of Cape Town had cautioned residents in part of the city on Friday to boil their tap water before use.

This was due to the Faure Water Treatment Plant system distributing discoloured water.

But the latest sampling results show that it is now safe to drink. The discolouration experienced in parts of the eastern, central and southern suburbs has been resolved, said MMC for Water and Sanitation Zahid Badroodien.

“This means that residents in the affected areas need no longer boil their water before drinking or cooking.”

The sampling conducted by Cape Town’s Scientific Services Branch and Environmental Health Service indicates that the basic commodity is safe to drink.

It shows that the quality complies with national standards for drinking and is safe for consumption.

“Residents in areas who were advised to implement the precautionary boil notice, need no longer do so. Should households geyser still be holding some discoloured water, residents should allow this to clear before using it for drinking or cooking purposes,” said Badroodien.

The cause of the discolouration was due to cumulative effects of the different stages of loadshedding. This caused a process control fault at the Faure Treatment Plant.

“The plant has been scoured and restarted – however, work is ongoing to ensure that it is operating properly before being reconnected to the water distribution network. The City of Cape Town wishes to thank residents for their patience and cooperation during this time,” Badroodien said.