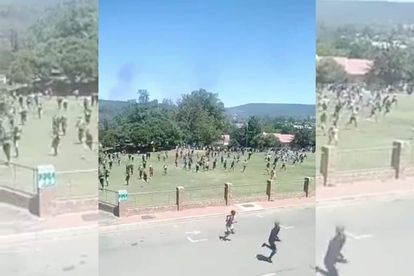 The University of Fort Hare, according to videos posted on social media, is undergoing a shutdown. Police have allegedly stormed into dorm rooms shooting at students following alleged protests over financial exclusions.

Students alleged the university had called the police and private security in response to their peaceful march. Some videos and photos show pools of blood on bathroom tiles.

University of Fort Hare institutional advancement director Tandi Mapukata said otherwise — she claims that on Tuesday 25 February, the university’s management was forced to suspend academic activity and release staff at its Alice campus due to violent student protests which included chasing staff out of offices,  thus leading to a complete disruption of campus operations.

Mapukata also said there have been no fatalities and 11 students were treated for minor injuries at the Victoria Hospital in Alice.

Here’s why students have been protesting

At the heart of the protest is a ‘Register One Register All’ demand by students who have been financially excluded due to historical debt.

According to Mapukata, management has implemented all of Minister of Higher Education Blade Nzimande’s recommendations regarding the handling of student debt.

“Therefore, all students who qualify with the set criteria (including NSFAS funding)  have been allowed to register. Unfortunately, there remains a category of students who do not meet the criteria set out by DHET (and the University of Fort Hare),” said Mapukata.

Management says they have continuously engaged with such students and a number of concessions in this regard have been made.

Despite the university’s efforts to find amicable solutions,  on Monday and Tuesday, students blocked the university entrance, burnt tyres and blockaded the R63 in front of the University. There were running clashes with Public Order Police (POP). Even a truck delivering supplies to a local business was ambushed and looted.

In an effort to restore calm and stability, the Registrar invoked an existing court interdict which prevents students from disrupting campus operations. The Registrar gave the students advance warning that the court order would become effective and that by law, POPS have a duty to restore peace.

On Wednesday, students continued to pelt police and private security on campus with stones, provoking them to retaliate. Later 11 students were arrested. Academic activity on the Alice campus is still suspended.

Two students murdered in one month

Apart from student dissatisfaction and a heavy police presence, there have also been two murders reported on the Alice Campus in just one month.

On 8 February,  Yonela Boli was allegedly killed by his girlfriend at the University of Fort Hare.

Both men, both students at the university were stabbed to death.

Ironically, Tshefu died on the same day his friend, Boli, was buried in Seplan — a village situated in Cala, Eastern Cape.