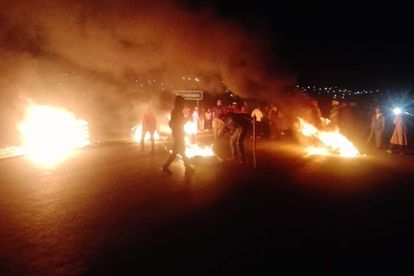 Two farmers from Uniondale in the Little Karoo have been arrested for allegedly shooting at protesters during a demonstration on Monday morning.

Earlier this week, disgruntled community members took to the streets in numbers to protest inadequate service delivery. The protest action disrupted traffic on the N9 highway between Willomore and Uniondale, leading to the road’s closure.

Farmer blockaded while travelling with wife and child

Pojie explained that a farmer had discharged his weapon to disperse protesters after his vehicle had been blockaded. According to initial investigations, the farmer was attempting to travel into town. Pojie said:

“The farmer, his wife and child were on their way into town when they were blockaded by protesters. The farmer discharged his shotgun on protesters.”

Charges of attempted murder and discharging a firearm in a municipal area were opened as investigators recovered shell casings and statements from eye-witness at the scene.

Secretary of the African National Congress (ANC) in the Western Cape, Faiez Jacobs, called for the immediate arrest of the farmer in question along with urgent intervention from the Human Rights Commission. Jacobs said:

“This is what happens when our people exercise their right to protest. We demand that the farmer be charged without any delay.”

“Residents had demanded that George’s DA Mayor, Mike Naik, be in Uniondale today (Monday) to collect a memorandum from them. He did not come and sent the Deputy Mayor Charlotte Clarke. We turned her away and told her to tell the mayor that we want to see him and not her.”

On Thursday, police arrested two men in connection with the two separate Uniondale shooting incidents. Pojie confirmed that three people sustained injuries as a result of the farmers’ actions and, as such, the accused had been charged with attempted murder, pointing of a firearm and the illegal discharge of a firearm within a municipal area. Pojie said:

“We also confiscated three firearms – a revolver, a shotgun and a rifle – which will be sent for ballistic analyses.”

The accused are due to appear before the George Magistrates’ Court on Thursday.