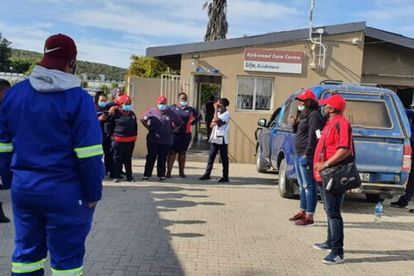 NEHAWU and SANCO have called for Life Esidimeni Psychiatric Hospital in Kirkwood to shut down. Photo: Mkhuseli Sizani

NEHAWU and SANCO have called for Life Esidimeni Psychiatric Hospital in Kirkwood to shut down. Photo: Mkhuseli Sizani

By Mkhuseli Sizani for GroundUp

Management of the Life Esidimeni Psychiatric Hospital in Kirkwood has accused the National Education, Health and Allied Workers’ Union (NEHAWU) of “storming the centre” on Tuesday and placing lives of staff and patients at risk. NEHAWU is protesting at what the union considers to be inadequate COVID-19 safety protocols at the hospital.

The provincial Department of Health reported last week that the hospital had 35 cases of COVID-19 and six deaths. Provincial health spokesperson Sizwe Kupelo confirmed these numbers to GroundUp, but also sent a Department of Health report on the hospital dated 31 May, saying that 27 patients and 10 staff members had been tested positive. The document referred to six deaths, but the table in the document recorded eight deaths.

The report said management had reported “sufficient supplies” of personal protective equipment for staff, though it was difficult to issue these to patients because of their condition. Staff adhered to distancing protocols but most patients were not able to understand them, the report said. Patients’ temperatures were taken every four hours, and all staff were screened daily on the entrance. Staff were recommended to go for private tests “as turnaround time is faster”.

CALLS FOR HOSPITAL TO BE CLOSED

NEHAWU and the SA National Civics Organisation (SANCO) called for the hospital to be closed on Tuesday. They said that a meeting with hospital management about safety protocols had “collapsed” and called for the shutdown of the hospital, the intervention of the Labour Department and the removal of COVID-19 patients.

However, hospital management denied that the meeting had collapsed. Puseletso Jaure, Managing Director, Life Esidimeni, told GroundUp: “Life Healthcare emphatically denies that a scheduled meeting between Life Esidimeni Kirkwood Care Centre management with NEHAWU or SANCO collapsed. We would like to clarify that representatives from both SANCO and NEHAWU arrived at the Centre, forced themselves in and in the process circumvented the strict adherence to the COVID-19 screening protocols before entering the facility.

“In storming the facility, they knowingly disregarded our strict COVID-19 guidelines, placing staff and patient lives at risk. Furthermore, they refused to leave the premises and had to be escorted out of the facility by the SAPS.”

“The disturbance by NEHAWU and SANCO has caused much anxiety to staff and patients.”

Patrick Bayini, NEHAWU shop steward and a maintenance worker at the hospital, said the official figures did not include new deaths. Bayini said staff, including nurses, worked without protective equipment and patients with COVID-19 were not isolated.

“In Unit 7 there are 72 patients in two wards. Those who are positive are not in an enclosed place.”

Jaure said the hospital would not disclose information on deaths. But she said the hospital followed the guidelines set up by the National Institute of Communicable Diseases about staff and patient safety, and “independent audits and audits done by the Department of Health confirmed compliance to guidelines and protocols.”

Mxolisi April, SANCO secretary in Sunday’s River, said the organisation had decided to intervene after staff had complained to SANCO. He said management was not prepared for the COVID-19 epidemic.

“The staff that works here is posing a danger to the communities of Kirkwood, especially in Moses Mabhida township where the bulk of the workers come from. They share public transport with us and have not been tested.”

April said they would also ask the taxi association to stop transporting workers to and from the hospital if management did not resolve the problem.

“Our staff members are not safe here because precautionary measures are not taken. The management is more concerned about profit than the safety of our members. The staff has been calling for tests but management says testing is too expensive because it costs R800 per person. The staff also lacks PPE. The positive patients are kept at Unit 7 and have no masks. That unit was not meant for isolation.”

“Six ambulances have been in and out of here today – that shows there is a crisis here. The hospital must be closed temporarily for decontamination and all the staff and their contacts tested. Also, management must find an alternative place to quarantine the positive patients because they easily infect one another because it’s hard to control them due to their condition.”

April said the patients who tested positive should be quarantined “in a place that is far from the people because Kirkwood is a small town.”

Jaure denied that the hospital was refusing to test patients or staff because of cost.

“The cost of the test is not a factor. All employees who have met the testing criteria and are showing symptoms have been tested as per the NICD and Department of Health,” she said.

Jaure said staff had been victimised by the community, “merely because they work at the facility”.

“We believe the storming of the facility and the staff victimisation is purely as a result of the community’s lack of understanding of COVID-19, PPE protocols and testing which is causing them anxiety and fear as they see the virus spreading easily between people.”

Kupelo did not reply to GroundUp’s further questions.