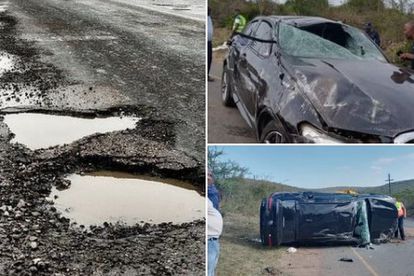 The gigantic and panicky potholes on the R66 where MEC for Transport, Community Safety and Liaison Neliswa Peggy Nkonyeni was involved in an accident have been thrust into the spotlight

Yesterday, Tuesday, 21 June, MEC Nkonyeni was travelling with her protectors on this pothole-riddled route when she got involved in a life-threatening accident.

The KwaZulu-Natal premier Sihle Zikalala, who wished Nkonyeni and her protectors a speedy recovery, said a tyre burst was the cause of the accident.

ALSO READ: JUST IN: KZN MEC for Transport Nkonyeni involved in an accident

However, frequent travellers of this route were quick to weigh their opinions – attributing the horrific scene to have been caused by neglected potholes.

“As tragic as MEC Peggy Nkonyeni’s car accident was, I can’t help to remark that the R66 is a provincial route and fixing potholes is her department’s responsibility. I wish more Ministers and MECs get directly impacted by their department’s failures to deliver proper services,” Sicelo Hlatshwayo tweeted after sharing an image of the potholes.

Also, the burst tyre story wasn’t entirely convincing to many as some observers believed the vehicle transporting Nkonyeni, a BMW SUV, overturned as a result of speeding. They argued that BMW vehicles are equipped with run-flat tyres which are less prone to blowing out.

Nkonyeni was headed to the Dannhauser Local Municipality after concluding a fruitful meeting in uLundi, north of the province, with Premier of KZN Sihle Zikalala and His Majesty the King Misuzulu kaZwelithini.

Her latest condition is unknown at this stage, however, Premier Zikalala left her in a stable condition yesterday.

The event in which Nkonyeni was meant to attend yesterday continued as planned where 4000 youth were deployed to conduct repairs in flood-damaged and other ageing infrastructure projects in the Dannhauser Local Municipality.