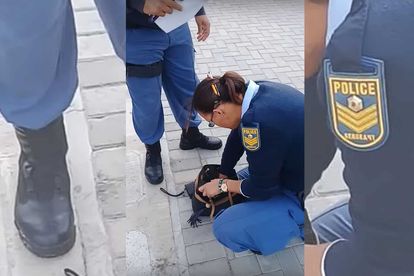 A 23-year-old Blue Downs woman is considering suing the police after being arrested while sitting on a bench in Sea Point and then being locked in a cell for the night.

Esethu Mcinjana was in Sea Point on Sunday 19 May for a job interview at a hotel at 10:45am. She arrived early for the interview and went to sit on a bench on the promenade to wait.

“I pressed the buzzer when I arrived but no one responded so I went to sit on a bench overlooking the beach.”

She said she was taking selfies at about 9:20am when she was approached by a police officer who asked her what she was doing there.

“Her tone was aggressive. I explained to her that I was there for an interview but was early. She didn’t believe me and said there are no interviews on a Sunday.”

“She grabbed my bag and started searching it, throwing my things on the ground. My CV, a few of my toiletries and my house keys were in the bag,” said Mcinjana.

She took a video which clearly shows the police officers who were searching her bag, a Sergeant Smith and Constable Prince.

She says Smith found her house keys with a gate remote switch in the bag. Smith is heard saying in Afrikaans on the video, “I found what I need to.”

Mcinjana said she was accused of being a robber. “She said I used the remote to rob people’s cars. I tried to explain that the remote wasn’t even working but I was using it as a key holder.”

Smith called a police van on her radio, took Mcinjana’s phone and made her get into the van. She said she was taken to Sea Point police station, handcuffed and shouted at by Smith, photographed and fingerprinted and then put into a cell.

“I tried to show the police officer the email that shows I was there for an interview but she didn’t listen to me. She just put me in a holding cell,” said Mcinjana.

She says she was only given her phone at 4pm to tell her mother where she was.

She was told she was a suspect in car break-ins. The police still have her gate remote and keys.

Mcinjana said some of the officers at the station told her that the way she was being treated was wrong.

Her mother, Margaret Mcinjana, told GroundUp when she called the police station she was told it was too late to see her daughter that day and she must come in the morning.

“When I went the next morning I was only given three minutes to speak to her,” said Margaret.

“My daughter left home for a job interview but ended up in jail. For what? She has never done anything wrong. She was looking forward to that interview.”

Margaret confirmed to police that the remote switch they had taken from her daughter’s bag no longer worked and was just used as a keyring.

Sea Point SAPS spokesperson, Captain Elizabeth Munro, said Mcinjana had been found to be in possession of “vehicle breaking” implements.

However, Munro said, there were “no prospects of successful prosecution as discussed with the senior prosecutor”.

Mcinjana says she is consulting lawyers and also intends to approach the Human Rights Commission.

“I feel violated and angry. Someone I expected would protect me, a police officer, treated me in that way and ignored my rights. I spent a night in a holding cell. For what?”

Mcinjana said she was released at 3pm on Monday. She said she was too embarrassed to get in touch with the hotel people who were expecting her for the interview.