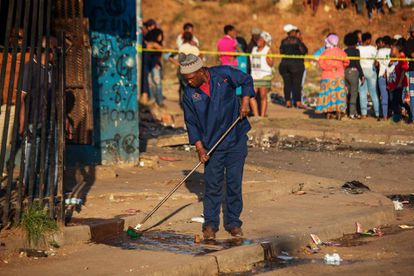 Unemployment resulting from the COVID-19 pandemic is bringing Gauteng households to the brink of extreme poverty. Photo: AFP/Michele Spatari

Unemployment resulting from the COVID-19 pandemic is bringing Gauteng households to the brink of extreme poverty. Photo: AFP/Michele Spatari

South Africa’s unemployment rate has crept up by 0.1% on Tuesday, breaking an 11-year-record in the process. After slumping to low levels in the previous quarter, the country has gone backwards once more on the jobs front – and it’s a factor that has stirred anger across the political divide.

How many people are unemployed in South Africa?

Not since the global recession – and the pre-Jacob Zuma era – have so many working-age South Africans been out of a job. According to the data, a painful 58% of citizens aged 15-24 are without work. A total of 34.3% of females in that age bracket are also without training or education:

The numbers are enough to make you shudder. Somehow, South Africa has 2.2 million more unemployed people than it did this time ten years ago. There has been no truly sharp increase in the unemployment rate in a short burst of time, but rather, a gradual malaise towards the dreaded 30% mark:

Cyril Ramaphosa won the ANC leadership on a ticket of anti-corruption and job production. The jury’s out on the former, but a comprehensive body of evidence is building against the president on the latter. The employment market has stagnated since he assumed the top-job in February 2018, and needless to say, it’s riled up the opposition:

John Steenhuisen, DA Parliamentary leader: “The current policies are not working, unemployment and poverty are growing. We need to build an inclusive enterprise economy that promotes aspiration by building equality of opportunity, not equality of outcome.”

Matt Gerstner, Policitcal Strategist: The unemployment numbers are devastating. Two in five South Africans can’t find work or have given up looking. This is the highest since the QLFS measurement started. The ANC has no plan.

Beverley Schafer, Deputy Speaker of the Western Cape Parliament: “When will this be deemed a crisis in South Africa and acted upon?”