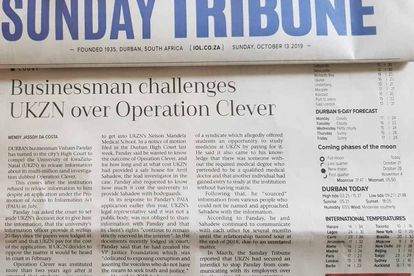 Durban businessman Visham Panday has scored a legal victory in his protracted fight to expose alleged corruption at the Nelson R Mandela School of Medicine at the University of KwaZulu-Natal (UKZN).

The university has been ordered to release its in-house report – following a 4-year probe – into the alleged ‘sale’ of medical school places, according to the MedicalBrief website.

In 2018, Panday said he became aware of “corruption at the university where placements at the Nelson R Mandela School of Medicine were being offered in exchange for bribes.”

He also claimed that he knew the “identity of one such person, now a medical practitioner, who secured his placement through such corrupt means.”

Panday then turned to the KZN High Court after the university refused to give him information about its internal investigation, called Operation Clever, into the matter.

Judge Mahendra Chetty questioned why the UKZN investigations had dragged on for four years and why the university wanted to keep its findings secret.

“One would have assumed that in the interests of rooting out corruption … the university would have no hesitation in exposing those involved in the corruption, if for no other reason than to ensure the integrity of the institution and to assure candidates who apply to study at the medical school that their applications are considered on merit alone.”

Panday, who runs the corruption-busting VP Justice Foundation, launched his own investigation after becoming aware of the pay-offs, linking up with a UKZN forensic audit specialist, Avril Sahadew, who had been leading investigations since 2016.

The university said irregularities unearthed by Sahadew’s probe were referred to the Hawks.

“The investigations have dragged on for almost four years without any persons involved being criminally prosecuted or convicted,” Judge Mahendra Chetty said in a scathing judgment.

In defence, UKZN said it had suspended 21 employees, and there had been resignations, disciplinary inquiries and dismissals as a result of the probe.

The university said Sahadew had been provided with a safe house and bodyguards because she was being threatened.

But it argued, that by providing the details to Panday, it would be compromising and prejudicing Sahadew’s safety, adding that it would have to divulge the identities of people implicated in the investigation “as well as any involvement of possible syndicates” if it provided a copy of the ‘Operation Clever’ report.

“In respect of both the costs of the safe house and the bodyguard protection services, I see no reason why the university cannot provide details of the costs incurred and the duration of the services rendered,” countered Judge Chetty.

“To the extent that ‘documentary proof’ has been sought by the applicant, if this would entail disclosure of the location of the safe house or the identity of the bodyguards, these details could be redacted,” the judged continued.

“While the university objects to disclosing the name of the entity providing the security services, I can see no reason why this should be refused. For the same reasons, I cannot find any lawful basis for refusing to disclose the costs of Operation Clever to date. … I think that such disclosure would promote the interests of transparency and accountability.”